Neil Cavuto, the long-standing captain of the Fox Cheer Leading Squad for America’s corporatist economy, is charitably contributing to a detailed portrait of the quality of the financial news that the Fox Business Network will start broadcasting in October. And it IS a pretty picture. A picture filled with rainbows and bluebirds and silk PJs for all.

In the days leading up to the Dow topping 14,000, Cavuto and Co. were uncontrollably giddy with praise for free markets, capital gains tax cuts, and President Bush’s economic policies. It was as if the only thing that constituted business news was the happy-talk that he himself was manufacturing by the truckload. At the same time, he would condemn those who dared to report the bumps in the road. For example:

In Misery Sells, Smiles Do Not (July 27, 2007), Cavuto takes on what he perceives as the unnecessary attention the press gives to market declines:
“Man, I saw this one coming. The Dow plunges more than 300 points, and it’s front page news. Down to the dude covering his face in anguish in The Washington Post. And the gloomy top banner story in The New York Times bemoaning a global stock market tumble.”

In The Economy Stinks? Says Who? (July 13, 2007), Cavuto dismisses the public’s pessimism about a market awash in volatility:
“So six out of 10 of us say the economy stinks. Must be so because USA Today says it’s so. Me? I don’t believe it. Not a word of it.”

In The ‘Real’ Reason Markets Are Nervous (August 01, 2007), Cavuto blames another downturn on John Edwards who, despite running third in his party’s primary, has infinite power over Wall Street:
“Taxes are going up. Stocks have been going down. I don’t think it’s just a coincidence […] this isn’t about hedge funds. It’s about capital gains taxes and John Edwards saying he wants to raise them.”

In When Is a ‘Meltdown’ Not a Meltdown? (August 07, 2007), Cavuto downplays the significance of the credit crunch, with implications that there really isn’t any problem at all.
“This “meltdown” affects roughly 4 percent of all mortgages out there. So, that means 96 percent of mortgages are being paid on time.”

Now, none of this should come as a surprise to those familiar with Fox News, its editors or its management. Rupert Murdoch, after all, has admitted that he intends to color his business reporting with a rosy hue, saying that…

“…a Fox channel would be â€˜more business-friendly than CNBC.’ That channel â€˜leap[s] on every scandal, or what they think is a scandal.”

Now that the Dow has dropped below 13,000, just 27 days after its peak, do you suppose that Fox and Cavuto will suddenly deliver a more honest account of these roiling markets? That seems doubtful considering that on this day, when the Dow swung negative over 300 points before closing down just 15, the headline guest on Fox’s post-bell market wrap was the world renowned economist and health care expert, MTV’s Kurt Loder.

To be fair, Loder repeated several times that he was not an expert on economics or health care, but that didn’t stop him from shoveling his uninformed views down the throats of Fox’s intellectually fragile audience. The bigger question is why Fox News invited this dinosaur to lecture us on issues he concedes he is unqualified to discuss in the first place. Most likely it has something to do with his having been the author of a fiercely partisan and factually vacant essay on Michael Moore’s documentary, Sicko, wherein he called Moore a brazen con man who cherry-picked facts and manipulated interviews, and labeled him “a proud socialist.” 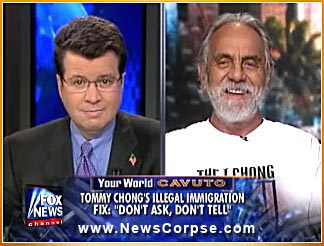 As it turns out, there is a serious problem in the credit markets with skyrocketing foreclosures and constricted liquidity. But news consumers who are exposed to Fox’s representation of these events are certain to end up both dangerously ill-informed and decidedly broke. And what’s even more frightening is what the future holds for financial reporting. With the coming launch of the Fox Business Network and Murdoch’s digestion of the Wall Street Journal, there is going to be a lot of bad advice floating around – and a lot of people are going to get hurt.