In a never ending effort to scare the bejesus out of their glassy-eyed congregation, Fox New is now speculating that President Obama is building something nefarious under the White House lawn: 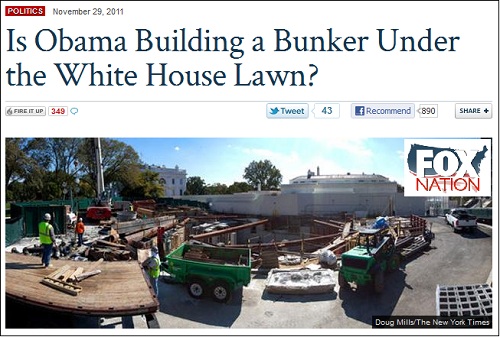 Oh my. What ever could it be? The suggestion that it might be a bunker is obviously a rouse because the White House already has an underground bunker (Dick Cheney famously hid out there after 9/11). Maybe it’s a lab where they are attempting to reanimate Karl Marx. Perhaps they are moving the classified artifacts from Area 51 to Washington. Could it be a secret prison to hold Rush Limbaugh and Michele Bachmann? Just think of the unholy experiments they could conduct on them.

Whatever it is, we should be dreadfully frightened. Obama is, after all, the Anti-Christ plotting to launch an Apocalyptic holocaust. We must ignore the facts that have already been revealed about this mysterious project. We can’t trust facts. As Stephen Colbert has advised us, facts have a well-known liberal bias. It is our patriotic duty to presume that the most outlandish conspiracies are behind everything that emerges from the Obama White House. What else can we do when we have a Muslim from Kenya steering the nation toward communism? Take heed, America.