Fox News waited until the last day of 2011 to publish the most absurdly hyperbolic piece of journalistic comedy/trash of the year. And that’s a high bar for Fox.

Dan Gainor is a VP for the Media Research Center, an ultra-conservative operation that exists to bash Democrats and advance the myth that the media is liberal. In an op-ed for Fox, Gainor breaks all records for overstatement and ironic tunnel-blindness. He begins the unintentionally hilarious article by declaring that the…

“Huffington Post, HuffPo, as it is sometimes called, has evolved from a simple news aggregator into one of the most sophisticated propaganda operations the world has ever seen. […and that Arianna Huffington is…] the most powerful propagandist since a guy named Goebbels.”

That’s the kickoff to Gainor’s Fox News article that castigates Arianna Huffington and the Huffingtong Post as left-wing missionaries of fascism. [This just in: The CEO of Huffington Post/AOL, Tim Armstrong, has contributed the maximum donation this year to the presidential campaign of Mitt Romney.]

It doesn’t get much better after that. Gainor carelessly contradicts one of the primary edicts of conservative free marketing: that Fox News and talk radio are so abundantly successful because the media consuming public prefers the conservative message. He says of Huffington that…

“The site was started by political chameleon Arianna Huffington, who used to be conservative before she discovered it was far more lucrative to be liberal.”

There you have it. Apparently the people do want liberal media. From there Gainor goes into a diatribe against HuffPo that would make a much better tirade were it directed at Fox’s own Fox Nation. It’s astonishing how oblivious he is to the twisted irony of his words. For instance, he wonders aghast that “Everywhere you look on the site, Republicans and conservatives are doing something bad.” Replace “Republicans and conservatives” with “Democrats and liberals” and you have a perfect description of Fox Nation. Then he continues his HuffPo rant…

“The few stories that mention Democrats at all are such puff pieces that most journalists would be embarrassed to be associated with them. One shows a baby putting his hand in Obama’s mouth: ‘Obama Gets A Mouthful,’ readers are told in this thoroughly silly story.” 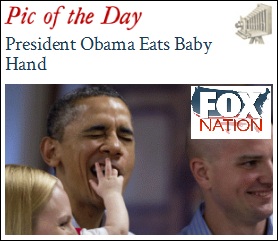 Indeed. A thoroughly silly story that most journalists would be embarrassed to be associated with. Which must be why Fox Nation featured it for six days running as their “Pic of the Day.” And their version was adorned by a mocking headline that evokes child abuse and cannibalism. Would they have chosen that imagery for a white president?

But Gainor is clearly unaware that he is insulting the journalistic integrity of his pals at Fox. Just as he is unaware of the similarity of the following invective aimed at HuffPo to the Fox Nation business model:

“Of course, they don’t write it all themselves. The HuffPo staff is masterful at combing the internet for stories and digging through them for one nugget that makes their point. They write a couple graphs about the nugget, package it with a sometimes huge headline and a stock photo and, voila, their work is done.”

That’s Fox Nation in a wing-nutshell. Except that they write none of it themselves. Every single article on Fox Nation is merely a reference and a link to some other (usually brazenly biased) source. And often its presentation is overtly dishonest as demonstrated here. And Gainor isn’t through yet.

“But the site doesn’t work if it doesn’t generate traffic. After all, Americans aren’t forced to read Arianna’s propaganda. So it’s filled with sex, more sex, comedy and enough other trash to keep people visiting.”

You mean like this? I took a look at Fox Nation’s “Pic of the Day” for just this year and found an abundance of evidence that they are obsessed with naked women, particularly their breasts.

And being a young blonde in a short skirt appears to be a prerequisite to be a female reporter on Fox News. Just ask Megyn Kelly, Martha MacCallum, Shannon Bream, Gretchen Carlson, Monica Crowley, Ainsley Earhardt, Courtney Friel, Alisyn Camerota, Molly Line, Molly Henneberg, Julie Banderas, and Steve Doocy. [Oops. I have to scratch one of those. Julie Banderas is not a blonde].

For Gainor to use an editorial on Fox News as a platform to gripe about the Huffington Post being a liberally-slanted web site is an Olympian feat of hypocrisy. But for him to venture off into Nazi references is offensive in the extreme. Arianna Huffington is not responsible for the slaughter of millions of innocents and the comparison to Hitler’s regime trivializes the horror that was the Holocaust. Furthermore, his assessment of HuffPo as biased is an affirmation of acute self-delusion. He is so altogether unaware of his perversion of reality that he can utter this phrase about HuffPo without meaning it sarcastically: “It’s also unmatched on the right.”

Gainor’s editorial is typical of the ignorance-inducing disinformation that is the hallmark of Fox News and his own Media Research Center (publisher of the reprehensible net newsrag, NewsBusters). He launches odious insults, accuses his targets of improprieties that he engages in himself, and ignores obvious information if it contradicts his predetermined conclusions. And all of this intellectual mendacity comes together at the start of a new year as if to christen 2012 for a journey to new and more loathsome states of dishonesty and thought control.

9 thoughts on “Fox News: The Most Powerful Propagandist Since Goebbels”