Get out your checkbooks, America. An unprecedented opportunity has just presented itself and, trust me, you do not want to miss it. This is a once-in-a-lifetime chance to rub shoulders (and who knows what else) with the Grand Old Party’s grandest candidate, former Massachusetts governor, quarter-billionaire, and champion job killer in both the public and private sector, Willard Mitt Romney.

Fox Nation is promoting an exciting new contest sponsored by the Romney campaign. The winner of the contest gets to “Spend the Night With Mitt for Just $1.”

Wow, really? The whole night? Will his wife be there? What will he be wearing? I know there won’t be any alcohol (he’s a Mormon, you know), but who supplies the Viagra? Can I bring my video camera?

The comedic and disturbing inferences that spring to mind upon reading this news write themselves. But the Fox Nationalists published it with a straight face and no mention of the inherently creepy nature of the contest. What, you might ask, makes it inherently creepy? Well, that’s exactly what Fox Nation called it when they reported that the Obama campaign did precisely the same thing. 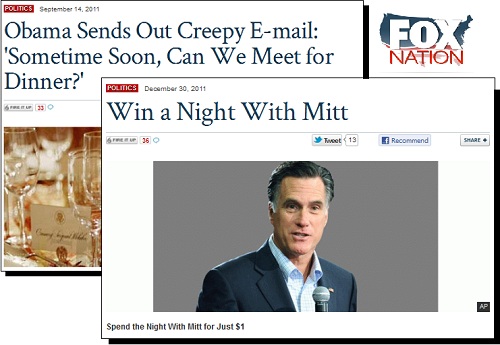 Just a reminder: The Fox Nation “Statement of Purpose” says…

“The Fox Nation is committed to the core principles of tolerance, open debate, civil discourse, and fair and balanced coverage of the news.”

Yet somehow, when Obama has a contest to join him and Michelle for dinner it’s creepy, but no such derogatory editorializing for Romney. Furthermore, they make no comparison between the contests themselves. Obama offered any donor who contributed $3.00 or more an equal chance at the prize dinner. Romney’s contest offers donors an entry for each dollar they donate. Therefore, if you donate $1.00 you get one entry. If you donate $1,000 you get a thousand entries. Consequently, wealthy donors will have far more chances to win. That should help Romney avoid having to spend the night with the unclean lower and middle class Republicans who might enter the contest.

Perhaps a corporation will win the night with Romney, since he says that they are people too.