The Republican National Committee has just filed an amicus brief with the U.S. District Court in Virginia in support of a ruling that would eliminate the ban on corporations making direct donations to political candidates.

Such a ruling would magnify the catastrophic decision issued by the Supreme Court in the Citizen’s United case that permits corporations to make unlimited donations, anonymously, to political action committees. The RNC’s latest move would broaden that allowance to permit such donations directly to candidates.

This is another attempt by the GOP (Greedy One Percent) to usurp power in America from the people and transfer it to the wealthy and to unaccountable business entities. Even though individuals are not allowed to make unlimited donations to political candidates, Republicans want to give that power to corporations.

The result is much worse than the current situation wherein corporations are legally viewed as persons. If this ruling stands, corporations might as well be elevated to Gods. They will have far more omnipotent control over the affairs of humans than humans do themselves. Plus, like Gods, corporations are immortal. They direct our daily behavior. They control our bodies through drug testing, and our minds through propaganda They decide whether we will be able to pay rent or purchase groceries and medicine – essentially whether we live or die.

But unlike Gods, corporations have no moral code, no soul. They are unconcerned with the welfare of people. They are not held accountable for the pain, suffering, and even death that they cause. If I put e-coli bacteria in your soup and you die, I will go to jail, and perhaps be executed. If a corporation feeds tainted soup to millions they might get a fine and a request to recall the soup.

What’s more, corporations have no national loyalty. They are borderless entities that will ship jobs off to the cheapest, most exploitative locations for labor, then re-import those products made in near slave labor conditions and sell them back to us at inflated prices – including medicines that people require to live.

The only obligation that corporations are held to is to return value to shareholders. Period. It is a legal obligation for which they can lose their charter if they fail to comply. It is also a coldhearted standard of ethical behavior that differentiates corporations from people. People care about their families, their communities, their country, and their world. It is that caring that qualifies people to govern themselves. When we hand over that role to corporations, we put everything we care about in the hands of dead entities that were created for the sole purpose of making money.

Yet the Republican National Committee is pleading with the courts to give corporations more power than they have ever had, and more power than ordinary flesh-and-blood people could ever match. That’s today’s Republican Party to which the Tea Baggers and evangelicals are flocking. And they have to be stopped before we are nothing more than anthropogenic machines forced to serve the interests of the Corporation Almighty.

This is serious business. It is not some nuisance suit by an obscure fringe character. This legal action has been taken by the official body of the national Republican Party. It is not a joke. Nevertheless, Comedy Central’s Jon Stewart has once again distilled a complex and profound issue into a concise declarative statement that makes the point in an understandable and compelling way: 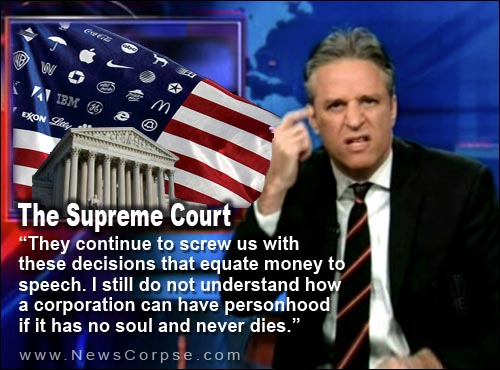 Indeed. And the Supreme Court, dominated by a right-wing Republican majority, is now getting help from their party apparatus. And their frontrunner for the GOP nomination for president, Mitt Romney (or R*Money as his Highlife Homies call him), famously came out in support of the ludicrous notion that corporations are people.

This is becoming an ingrained principle of conservative politics and we must not allow it to succeed. So keep up the fight, because Corporations Are Not People. Here are some ways to contribute and participate:

4 thoughts on “Corporate Godhood: When Corporate Personhood Is Not Enough”