Once again Fox News is demonstrating their overt hostility to anything and everything in the Obama administration. It doesn’t matter if unemployment has dropped two points or that Osama Bin Laden is dead, somehow everything this administration does is tantamount to treason.

Case in point: The Department of Justice recently announced that it had promoted Tony West, the head of the Civil Division, to a new post as Associate Attorney General. This promotion was the result of his exemplary performance. In his role as the head of the Civil Division, West “recovered more than $8.8 billion in taxpayer money, the highest three-year total in department history.” Ordinarily that sort of accomplishment would be heralded by a deficit-obsessed right-winger. But we are dealing with an epidemic of Obama Derangement Syndrome, the symptoms of which are all too predictable. Here is how Fox News framed the story: 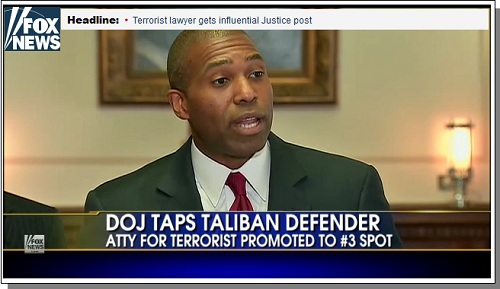 The headline on the Fox News web site declared “Terrorist Lawyer Gets Influential Justice Post.” On the air Fox News described Mr. West as a “Taliban Defender.” Both of these were deliberately designed to create the impression that West is affiliated with America’s enemies. Even worse, the story is being driven by a former DOJ attorney from the Bush administration, J. Christian Adams, who is defaming West and the entire Justice Department. Adams appeared on Fox & Friends with an all-encompassing allegation that Attorney General Eric Holder is…

Adams provides no support for his charge. And for someone with a record of dubious accusations that were easily debunked, Adams should be more careful with his unsubstantiated rebukes. He has previously tried to concoct DOJ conspiracies to prosecute civil rights cases against white defendants while letting black defendants off the hook – again, with no evidence to support it.

The characterization of West as a terrorist sympathizer stems from his having worked for a law firm that defended John Lindh, aka the American Taliban. That service is viewed by right-wingers as fraternizing with the enemy. American conservatives have long sought to portray themselves as the defenders of the Constitution despite the fact that they frequently show disdain for its most fundamental principles. For instance, the Sixth Amendment that guarantees a right to an attorney. That is the principle that West was patriotically upholding when he helped to represent an American citizen charged with a serious crime. But Adams expressly believes that respecting the Constitution in this manner disqualifies you from ever serving your government.

The larger condemnation that Fox is attempting to assert is that Obama and his entire administration is in cahoots with Al Qaeda. It is part of their years long effort to paint the President as a foreigner, a Muslim, and an anti-American socialist. That anyone actually believes those allegations is a testament to the success Fox has had in instilling ignorance in their audience. In the three years that Obama has been in office there have been more terrorists brought to justice (captured or killed) than in eight years of the Bush administration – and that includes Osama Bin Laden. So obviously Obama is working with Al Qaeda. It is part of their devious plot to allow him to dispose of their own members to make the American people think he isn’t one of them.