Today there are critical Republican primary elections being held in Wisconsin, Maryland, and Washington, D.C. There is a still raging controversy over the shooting of Trayvon Martin, an unarmed teenager in Florida. There is a tornado ravaging northeast Texas including the metropolitan areas of Dallas and Fort Worth. We have ongoing crises in the domestic economy and foreign affairs. And yet, the Fox Nation web site is featuring this story at the top of their page: Does the President Want to Be Emperor? 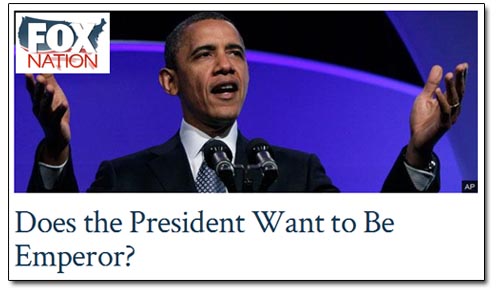 With everything that is happening around the country and the world, the Fox Nationalists seem to think that this is a serious question that deserves to be featured in the most prominent spot on their page. What it is in reality is a disparaging assault against President Obama that the accompanying article doesn’t even make an attempt to support. The article begins by saying…

That is not by any intelligible interpretation a bid to become emperor. In fact, all the President is doing is articulating established principles held by Democrats, and most Americans, just as any politician would. He did not attack the Supreme Court. He merely offered his opinion that the court would not rule against the Health Reform bill. And as for oil companies, Wall Street, and the wealthy, Obama has simply restated the same positions that got him elected by a landslide three years ago.

The Fox fabulists are attempting to spin the President’s opposition to extremist right-wing policies as akin to dictatorship. I’m sure that conservatives would prefer that the President never said a word, but that would only be considered democratic to the censorious martinets of the GOP. The president has both a right and a duty to enunciate his platform, and if the right doesn’t like it they should offer competing ideas that think would be better. Since the only ideas they have are the same ones that got us into this economic catastrophe four years ago, I’m not surprised that they chose instead to make absurd declarations about tyranny.

However, if the right wants to ask dumb questions, you might think they would reserve them for an appropriate place for such opinions. Instead they lead their news with this tripe and still expect to be taken seriously as journalists. This is the sort of puerile behavior that is the trademark of Fox News. And we can expect to see much more of it as the campaign progresses into the fall. In fact, expect it to get much worse as they become more desperate for having been saddled with a nominee that no one in their party can stomach.