This was picked up by Media Matters and represents another incident where Fox News continues to permit their employees to make abhorrent comments with impunity. In this case it was anchor Heather Childers who Tweeted “Thoughts? Did Obama Campaign Threaten Chelsea Clinton’s Life 2 Keep Parents Silent?” 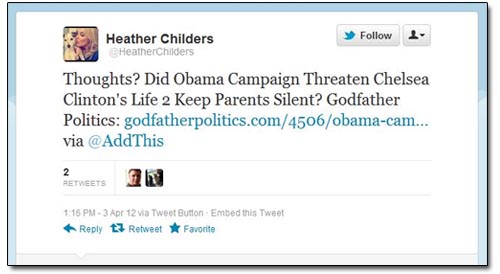 Childers question is referencing an article at a far-right blog that is neck-deep in Birtherism and other conspiracy theories. Media Matters has more screen shots of Childers’ Twitter feed where she initially defends her horrific comments. From Media Matters:

The post passes on suggestions from film producer Bettina Viviano about Obama associates threatening individuals to hide secrets about Obama’s eligibility. The post also forwards suggestions that the Obama campaign was involved in the murder of former head of the Arkansas Democratic Party, Bill Gwatney; threatened President Clinton; and “told him that his daughter Chelsea would be next if he opened his mouth.”

Childers insisted that she was only raising the topic for conversation. She repeatedly noted that she welcomes all sides in a debate. What’s offensive about this is that she thinks that an unsupported allegation about the President threatening to murder the child of a political opponent is a legitimate side and worthy of engaging in debate. Perhaps we could ask for “thoughts” on whether Childers is a crack whore who molests children. Hey, I’m just bringing it up as a subject for debate.

An update on the Media Matters page posts a comment from Childers’ boss Michael Clemente, that merely says that Childers “understands this was a mistake.” There was no indication of any punishment or consequences for her actions. And there was nothing that addressed at all a second Tweet by Childers that said “Thoughts: President Obama Channels Joseph Stalin and Attacks Supreme Court Justices.” So after speculating as to whether Obama was a murderer, she ups the ante and speculates that he somehow resembles a mass murderer.

And, as usual, Fox News tolerates this behavior and requires no penalty be paid. Not termination, not suspension, not even a public wrist-slapping. After so many similar incidents without punishment, the only conclusion is that this is behavior that Fox News encourages and very likely rewards.