It is well known that conservatives have a hard time with comedy. Their attempts at it are invariably embarrassing. Their practitioners (Dennis Miller, Victoria Jackson, etc) are notable only for being lame has-beens. Consequently, they spend the majority of their time on the subject bashing comedians they regard as liberals, but who are actually just comedians who recognize that Sarah Palin and Tea Partiers are funnier than health care reform and homeless veterans.

Today on Fox Nation, the featured item at the top of their page (you know, where the most important news of the day should be) is an article about last night’s Daily Show with Jon Stewart. The program was almost entirely aimed at mocking the left with segments on ludicrous expenditures by the General Services Administration and the abundance of emails from Obama’s reelection campaign.

The Fox Nationalists zeroed in on the GSA segment (video below) due to its conclusion where Stewart painfully conceded that Fox News was right to report on the story. And, as usual, they simply didn’t get the joke. What made Stewart’s tearful concession funny was the fact that acknowledging Fox News for doing something right is so rarely necessary or deserved. Nevertheless, the Fox Nationalists are taking pride in Stewart’s mock praise with a headline that says: Jon Stewart Finally Admits to Fox News: ‘You’re Right’ 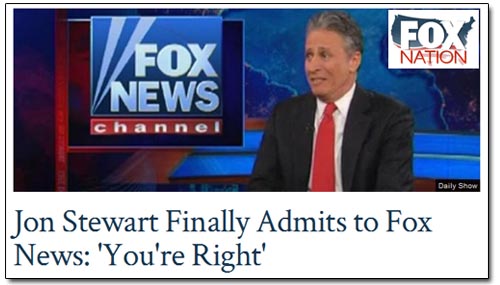 This characterization of the issue is consistent with Fox’s view, and that of conservatives generally, that Stewart is an unabashed liberal pushing a far-left agenda. Fox News CEO. Roger Ailes, once described Stewart as an “atheist and a socialist.” So the framing of this as Stewart “finally” coming around shouldn’t surprise anyone. Well, unless they have been reading Fox Nation where numerous stories have been published exalting Stewart for taking the conservative side:

For more documented BS from Fox…
Get Fox Nation vs. Reality. Available now at Amazon.

One has to wonder how Fox can publish so many stories demonstrating Stewart’s even-handed approach to issues and still criticize him relentlessly for being hopelessly biased. It’s like they have an ingrained need to hate Stewart for being a pinko comic-subversive, even as they are drawn to him for his humorous honesty. It’s a love/hate relationship that is driving them nuts. They simply don’t know which emotions to embrace. As much as they praise him for knocking the left, they are psychotically compelled to detest him, in part for fear of how their audience would react if they did not.

I wouldn’t expect this disorientation on the part of Fox to subside any time soon. Fortunately for them, they have never had a problem with harboring schizophrenic personalities that are diametrically opposed. That’s how they tolerate their own blatant hypocrisies such as with the recent controversy over unelected judges. And we can all be thankful that, if nothing else, this confusion may keep them from attempting any further forays into their own warped and cringe-worthy comedy routines.

One thought on “Jon Stewart Is Driving Fox Nation Crazy”