I have previously noted the often hilarious overuse of hyperbole by the dimwits at Fox Nation. Today they deliver additional proof that they don’t really know the meaning of the words they use. 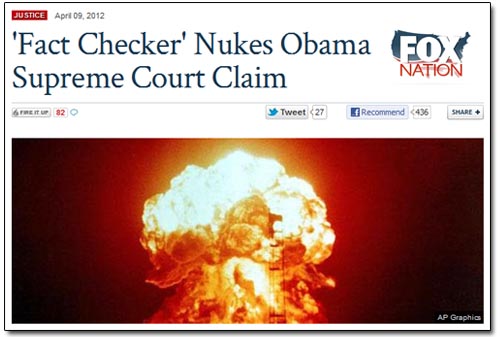 The Fox Nationalists are referring to the Washington Post’s Fact Checker column. The Post analyzed remarks by President Obama about the Supreme Court that the rightist media is twisting into absurd allegations of threats and ignorance of constitutional law. But a reading of the Post’s article reveals something short of a nuking. In several places the Post outright validates the President’s points:

“…the Supreme Court hasn’t overturned a sweeping law in quite some time. By ‘sweeping,’ we mean statutes that apply to virtually all citizens, as the Affordable Care Act does.”

The Post agrees with Obama on the economic substance of the ACA.

“The court affirmed Social Security under Congress’s Constitutional power to tax, while the Affordable Care Act deals with something different: the power to regulate commerce. As such, the health law involves an economic issue, just as Obama noted.”

The Post certifies that Obama was correct in saying that the Court overturning the ACA would be extraordinary.

“Many of the right-leaning legal experts we talked to acknowledged that the modern Supreme Court has largely — but not entirely — shown deference to Congress when it comes to such matters.”

The Post takes the President’s side on the question of whether prior cases were applicable due to their having a focus on economics or commerce.

“[T]he government lost two such cases during the Bill Clinton years. It argued unsuccessfully in U.S. v. Lopez (1995) that possession of a firearm at school constituted economic activity, and in U.S. v. Morrison (2000) that violence against women affected interstate commerce. Those cases dealt with economic matters, right? Not technically. The Supreme Court determined that the laws didn’t involve commerce at all.”

The Post notes that Obama was correct in his assessment of the Court’s deference to Congress.

“Obama correctly noted that the Supreme Court has shown more deference to Congress since the 1930s when it comes to economic legislation, but he said the court has upheld such statutes without exception ever since. This is only true in a very narrow sense.”

This is Fox Nation’s impression of having been nuked by the Washington Post. In fact, the Post gave Obama two Pinocchios, which they define in part as “using legalistic language that means little to ordinary people.” I’m not sure how the President could have made his case about a legal issue without resorting to legalistic language, so the Post is being somewhat obtuse in their rating.

But one thing is certain, there was no nuking going on. That’s just an effort of the part of the Fox Nationalists to inject a negative spin and hope that their audience doesn’t read the article for themselves (which they don’t have to worry about considering the incurious, dittoheadedness of their audience).

5 thoughts on “Fox Nation vs. Reality: Nuking The Fact Checker”