News reports are suggesting that later today the authorities in Florida will announce charges against Trayvon Martin’s shooter, George Zimmerman. Coverage of this story was handled by Fox News in a manner that is revealing and offensive – and wholly unique to Fox News:

This is a journalistic lynching. And note, this is not Fox Nation. It is the mothership, Fox News. The editors at this alleged “news” network are demonstrating their overt hostility to both African-Americans and journalistic ethics. If this picture doesn’t finally establish the overarching prejudice of Fox, it’s hard to know what will. Their bias is so clearly being exercised with a zealotry that the Klan would shrink from. How do they get away with this?

This is a more impartial photo that does not disparage the victim (although it still is not as overtly cheerful as Zimmerman’s pic). You think they got a few complaints about the previous photo? They must have had a reason for changing it.

[Addendum] A couple of commenters have asserted (without proof) that the lighter picture of Trayvon was the one that was Photoshopped. Let’s say, for argument’s sake, that they are right and that the picture Fox used was not altered (at least by Fox). That does not change the fact that Fox made an editorial decision to use that picture. They had numerous pictures from which to choose of both Trayvon and Zimmerman, and they chose the most negative picture of Trayvon which they paired with the most positive picture of Zimmerman. That was not an accident. It was the result of deliberate editorial judgment. And it tells us everything we need to know about Fox’s editors.

For more on the subject of media and race, check out the excellent book by Democracy Now’s Juan Gonzalez: News for All the People: The Epic Story of Race and the American Media.

There has also been some discussion as to whether making Trayvon look darker was inherently racist. Two points: 1) Making anyone look darker has the effect of making them look more sinister. And making the subject of a photo look more sinister, regardless of race, is blatant editorial bias. 2) Darker skinned African-Americans are not viewed more negatively by fair-minded people who are free of prejudice, but they are viewed more negatively by people predisposed to discriminate on the basis of race – i.e. Fox News viewers. Fox is playing to their audience and they know who they are. Studies show that the African-American segment of viewers of Fox News in primetime is only 1.38%. That compares to 19.3% for MSNBC, and 20.7% for CNN, numbers that are much closer to the 14% of African-Americans in the population at large. Or, as the Simpsons put it… 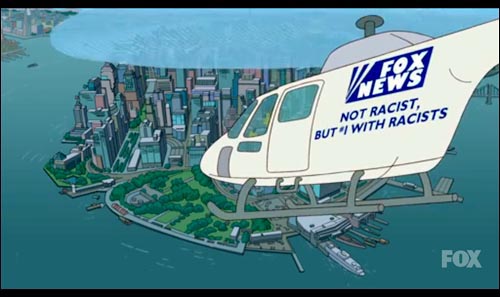 Finally, The question of whether or not George Zimmerman is racist, while important, is secondary here. The real problem is the racism exhibited by the local law enforcement authorities who simply accepted Zimmerman’s claims of self-defense without making an arrest and conducting a proper investigation. Exacerbating that is the overt racism of the right-wing press and their followers. The primary focus going forward should, of course, be the pursuit of justice and the suffering of the victims family. After that the focus should fall on the police and the media as this affair winds its way through the courts. But we should be grateful that concerned citizens spoke out and hit the streets to protest this injustice or there would be no court case at all.

75 thoughts on “Graphic Evidence Of The Racism Of Fox News: Racial Photoshopping”