This morning on Fox & Friends, the program’s hosts, two couch potatoes and one couch tomato, introduced a video that purported to examine “Four Years of Hope and Change.” What it was in reality was a four-plus minute campaign video attacking President Obama that presented a variety of soundbites by the President accompanied by ominous graphics and eerie music that falsely implied that his campaign promises were unkept. The video addresses subjects such as…

The video (which Media Matters thoroughly debunks here) could not have been a more pro-Romney, anti-Obama attack had it been produced by the Republican National Committee. When critics observe that Fox News is the PR arm of the GOP, it is precisely because of brazenly biased political activism like this. If there were ever a time for Fox News to be investigated by the Federal Elections Commission for improper political contributions, it is now.

Apparently Fox News has also recognized the gross inappropriateness of their anti-Obama attack ad. Minutes after the video was posted online it was removed from every place it had been posted. On Fox Nation a reader would have been greeted by a “Lost at Sea” page indicating that the content was no longer at that address. On the Fox & Friends site the video was replaced by an error message saying that they “were unable to play the media you selected.” What could have prompted Fox to bury their own video that had already been broadcast on the air?

Approximately an hour later the video reappeared on Fox Nation. However, it had been edited to remove all of the footage of the Fox & Friends crew introducing it and summing up at the conclusion. It’s almost as if Fox were trying to destroy any evidence of their involvement with the video.

Unfortunately for the propagandists at Fox, the evidence persists. Media Matters captured the whole production and made it available for all to see:

It was nice of the Fox Friends to credit the video’s producer, Chris White, for the fine job of partisan obfuscation he had done. Steve Doocy beamed, “No kidding. He remembered everything everybody said over the last three and a half, four years.” Well, actually he only remembered to piece together random bits from Obama’s speeches juxtaposed with negative graphics and false conclusions.

This should put an end to any talk that Fox News has been trying to moderate their bias, as some pundits suggested last year. Fox hasn’t changed at all. They are just as committed to falsifying their reporting, promoting their far-right agenda, and making imbecilic drones of their audience, as they ever were. This video would be ample evidence of that all by itself, but add to the mix Fox’s attempt to surgically excise their responsibility for it and you know all you need to know about their deceitful and dangerous intent.

Update: 2:30: The video has mysteriously disappeared again from the Fox web sites.
Update: 3:40: Now information is emerging that Fox News has been taking considerable heat for their bad behavior. It appears that the video has been disappeared by Fox. A weaselly statement was issued by Fox EVP Bill Shine who said…

“The package that aired on FOX & Friends was created by an associate producer and was not authorized at the senior executive level of the network. This has been addressed with the show’s producers.”

One has to wonder what happened to Fox’s “Zero Tolerance” policy that was instituted after a series of stupid mistakes. Now it seems that Fox is merely scapegoating an underling despite the glowing treatment that the Fox Friends gave the video and their effusive praise for the producer. The New York Times is reporting that Fox CEO Roger Ailes “was not aware of the video” even though he has previously taken a keen interest in the program. However, a lot of people were aware of this video because it was not only broadcast on air, it was posted to several sites online. 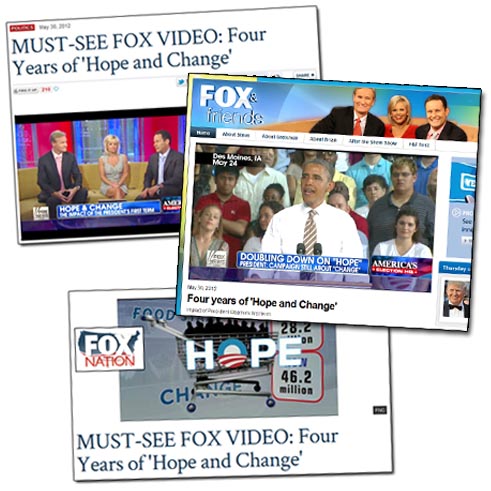 A few weeks ago a couple of NBC employees misleadingly edited an audio tape of George Zimmerman’s call to 911. NBC fired them and announced it publicly. Don’t expect the same from Fox. They don’t bother with trivialities like journalistic ethics. All they will do is say that it’s been addressed and then probably give the producer a bonus. That’s how Roger Ailes can make the ludicrous claim that “in 15 years we have never taken a story down because it was wrong.”

There is no way that Fox can avoid responsibility for this atrociously unethical affair. By now it is so obvious that Fox exists to promote Republicans and bash Democrats that this video fits squarely within their mission. The only difference this time is that they got caught crossing a line that they obviously weren’t worried about. That’s because they are so comfortable wandering across it that they’ve lost all cognizance of the line’s existence.

2 thoughts on “Fox News Produces An Anti-Obama Video – Then Scrubs It, Sanitizes It, And Scrubs It Again”