The World Wide Web is a cornucopia of Olympian ignoramusi. The field ranges from hollowed out heads in suits like Jonah Goldberg, to asylum escapees like Ted Nugent, to pitiful has-been bimbos like Victoria Jackson, to messianic delusionaries like Glenn Beck. With such an abundance of talentless charlatans like these posting staggeringly asinine missives online, the competition for Most Epically Idiotic Article On The Internet is stiffer than Mitt Romney at a gay bar four hours after overdosing on a bad batch of Viagra.

Leave it to Breitbart’s John Nolte to sink to the occasion and compose a work of astonishing stupidity. The title of Nolte’s opus, “Why the Media Hates and Fears Super PACs,” pretty much gives away the fundamental foolishness of his premise. The media is perhaps the biggest beneficiary of Super PACS (more on that later). But foolishness is the hallmark of Nolte’s career. Take for example this article wherein Nolte advocated murdering the mother of a young actress: 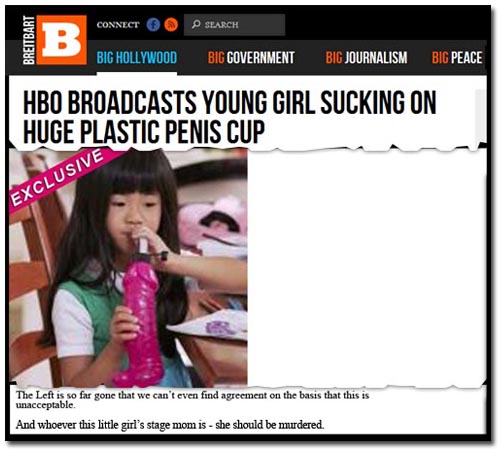 Breitbrat Nolte begins his incoherent rant with a typical bashing of the press as liberal, despite all the evidence to the contrary. With no substantiation whatsoever, he called the media “a gaggle of left-wing operatives disguised as journalists.” Nolte goes on to assert that the media fears the Citizens United decision handed down by the Supreme Court because the media is in the business of the “furthering of leftist causes.” Notice how he refers to the media as a single-minded entity shuddering frightfully at the thought of Citizens United. He makes no effort to document that assertion. But finally, Nolte gets around to what he regards as the core of the problem:

“[T]he media is objecting to free and unlimited political speech – the very thing protected by the very first Amendment. The media’s outrage that there are now no longer restrictions on how much money a company or individual can spend to further a political cause, is the same as expressing outrage that that most sacred of American rights – unlimited political speech – is no longer limited by a tyrannical government.”

Of course. The media is “outraged” that individuals and corporations can now spend unlimited amounts of money on ….. MEDIA! Where does Nolte think that the hundreds of millions of dollars that he concedes will be raised and spent is going to go? By far, the biggest share of that bounty will be spent on advertising in the media. The very same media that Nolte refers to as an amorphous singularity that is united in opposition to Super PACs. So obviously the media is beside themselves with rage. Their secret plot to advance socialism is way more important to them than the windfall in unprecedented profits. Anyone can see that.

Well, anyone that suffers from the same moronic myopia of Breitbrat Nolte, whose grasp of the particulars of the Citizens United decision is utterly confused. Nolte does not seem to understand that the decision opened the funding floodgates to allow unprecedented levels of unaccountable contributions that are tantamount to giving wealthy individuals and corporations permission to buy election outcomes. He describes it as a “First Amendment victory,” but it is a victory for dollars, not for voters. It changes the dimensions of democracy from “one man, one vote,” to “one dollar, one vote,” because now free speech comes with a price tag that only the wealthy can afford. How can the average citizen’s voice be heard when it is competing with Exxon or Karl Rove’s American Crossroads?

Nolte’s whining that the media has been enforcing a liberal tyranny over the nation and is enraged by new competition from the Super PACs created by Citizens United ignores the fact that the media themselves are participants in the rush to exploit the Super PAC phenomenon. Every major media corporation (Time Warner, General Electric, Comcast, Viacom, Disney, News Corp) already has their own. And they are spending heavily to advance their interests over those of the people. But Nolte has trouble with the concept of facts to begin with, as is apparent in this example from his article:

“Fact : In 2008, you heard almost no media outcry against all of that ‘outside money affecting elections.’ Today, that’s all you hear, especially after a Republican victory like the one last week in Wisconsin.

First of all, Nolte needs a remedial course in identifying facts. He cannot assert as fact that “you” heard nothing in 2008 about outside money. How could he know what you heard? Secondly, his main point as to the “media outcry” on campaign finance completely ignores that actual fact that fundraising by independent groups has long been a huge topic of discussion. It resulted in the passage of the McCain–Feingold Act in 2002 that put restrictions on certain types of contributions and spending. That act was still in effect in 2008, but was largely overturned in 2010 by Citizens United. If Nolte didn’t hear people talking about outside money in 2008, it’s because his ears were stuffed with right-wing bias and the smears and tangential trivialities that he helped to promulgate (i.e. Rev. Wright, Anthony Weiner).

Nolte makes an extraordinary leap in logic to assert that media companies are de facto Super PACs and that they have always been “allowed to spend unlimited amounts of money to push a political agenda.” But Nolte is not talking about any actual PAC activity. He is asserting the premise that any money spent collecting or reporting news is identical to spending for political advocacy. That’s because Nolte believes that all news is the work of the left-wing gaggle mentioned above. He writes that everyone from the Today Show to Saturday Night Live are “shill[s] for leftist causes.” Therefore, he sees the advent of Citizens United as a leveling mechanism.

“Thanks to ‘Citizens United,’ though, what you now have are mainstream media corporations forced to compete on a level playing field with other individuals and corporations, who can now spend as much money as MSNBC and Politico and The Washington Post, etc. to affect the outcomes of our nation’s politics.

“And this is why the media so loathes ‘Citizens United’ and those beautiful super PACs that have blossomed as a result.”

And therein lies the heart of Nolte’s Epic Idiocy. He actually sees Super PACs as “beautiful,” a blossoming bouquet of wholesome, corporate goodness. In fact, he veritably tingles at the thought of corporations being able to affect the outcomes of elections. Who wouldn’t want corporations – soulless entities whose only purpose is to increase shareholder wealth – to decide everything from how are children are taught, to the state of our environment, to Wall Street regulatory policy, to when, and with whom, we go to war? Nolte’s lust for allowing unaccountable corporations to assume control over the most profoundly personal aspects of our lives is downright perverse. It is also a nearly textbook definition of fascism.

And it’s a perversion rooted in ignorance because the backbone of his thesis is utterly false. It should come as no surprise that a web site called “News Corpse” is not suffering from a naive affinity for the press. But the stated mission of this site recognizes that the problem with the media is that it has evolved into an incestuous family of a few giant corporations whose interests lean more toward their own welfare than the welfare of the public they serve or the nation that protects their independence. The problem with the media is that it IS composed of giant, multinational corporations that exploit their market power and their influence over government.

It is difficult to comprehend how Nolte can harbor such a schizophrenic viewpoint wherein he worships corporations, but despises the media which are, in fact, corporations. He makes no sense in castigating the whole of the media for bitterly opposing Super PACs (for which he provides no evidence), even while they have formed their own and are projected to earn billions of dollars from the advertising headed their way. His opinion can only be described as twisted by a paranoid neurosis that prevents him from observing reality as it is.

It is that blindness that has created a monumental obstacle to rationality and earns Breitbart’s John Nolte the award for the Most Epically Idiotic Article On The Internet. And due to his puerile dimwittedness and cognitive ineptitude, this will surely not be the last time he will be so (dis)honored.

3 thoughts on “Breitbart Wins! The Most Epically Idiotic Article On The Internet – This Week”