The man who used to be known as Bush’s Brain may have spent too much time with America’s foremost remedial president. Karl Rove seems to have leaked a significant amount of grey matter as evidenced by this stunningly inept observation about President Obama and the economy:

“It is fine for him to try and blame it on President Bush or a Japanese tsunami or on ATM, but it makes him look weak, and the American people are not that dumb! […] Let him keep doing that because the American people see that as a weak leader. That’s not somebody who’s in charge. That’s somebody who’s making excuses. And we do not like to elect people President of the United States who are excuse makers. We want a president to be big and bold.” 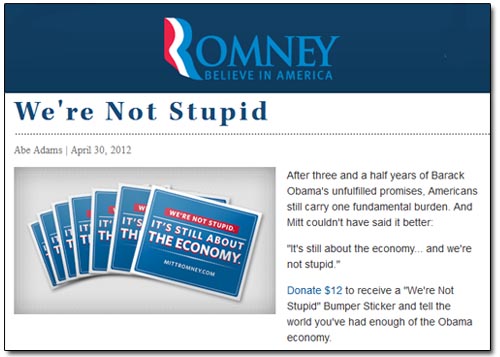 Got that? America wants a big, bold, non-excuse maker. And blaming Bush for the wrecked economy won’t work because the American people aren’t stupid. That’s a mantra that Romney also likes to chant. In fact, he made it into a campaign slogan. This may be the first time a candidate has ever had to go to such lengths to remind his followers that they aren’t idiots. But that argument becomes more difficult to defend when polling shows what the American people really think. A new Gallup poll says that…

“Americans continue to place more blame for the nation’s economic problems on George W. Bush than on Barack Obama, even though Bush left office more than three years ago.”

The poll shows that two-thirds of respondents (68%) still blame Bush for the state of the economy. That includes about half of the polled Republicans who also continue to hold Rove’s former boss accountable. Consequently, Obama should not be shy about hanging this economic albatross around Romney’s neck. The Romney campaign has already affirmed that their policy agenda is “Bush on steroids.”

Ironically, I have to agree with Rove about a couple of things. First, he appears to be right that the American people are not dumb. They know exactly who is responsible for where we are today and they are not likely to to want to return to the policies that got us here. Secondly, Rove’s advice that Obama continue to blame Bush is pretty sound based on the mood of the electorate.

The problem for Rove is that he’s right for all the wrong reasons. He doesn’t understand where the American people are, and he wouldn’t agree with them if he did. He’s just trying to rehabilitate his own shattered reputation because, as the political architect of the Bush administration, he’s just as responsible for the financial hole we are in as Bush is.

It’s about time that the right quit yakking about Democrats looking backwards to blame Bush. Obama is not reaching backwards to assign responsibility for current conditions to the past president. He is forecasting the future consequences of repeating those mistakes. It is the Republicans who are bringing the Bush era back to the table by proposing nothing but what the Bush administration did. They are offering nothing new in the way of solutions. In fact, the only initiative they will articulate out loud is to preserve the Bush era tax cuts for the wealthy. So the Obama administration has no choice but to rebut those proposals. That is not an attack on Bush. It is an attack on the current crop of Republicans who are parroting Bush.

And if it weren’t bad enough that Americans blame Rove and Bush for our current economic problems, they also blame Republicans in congress today for deliberately sabotaging the recovery in order to make Obama look bad. So not only are they dredging up the old Bush era policies that already failed so decisively, they are obstructing Obama’s new solutions from being enacted. 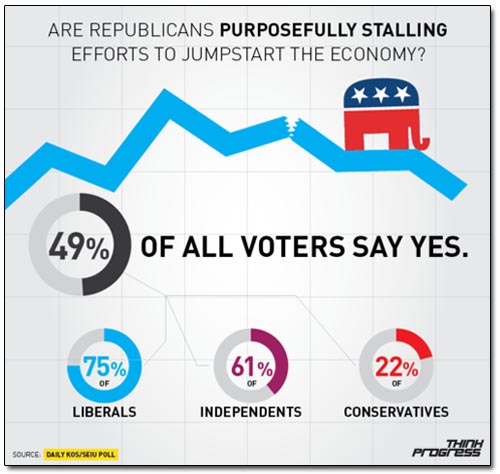 Since the day that Obama was inaugurated, the GOP has explicitly stated that their top priority is to make Obama a one-term president. That’s not a governing agenda. That’s the purest and most cynical form of self-serving, political gamesmanship imaginable.