One of the best known components of Mitt Romney’s Etch-a-Sketch candidacy is his epic flip-flop on the issue of abortion. In his 1994 campaign for the senate in Massachusetts, Romney was an ardent pro-choice advocate. It was a position he vigorously defended in a debate with his opponent Ted Kennedy. His remarks could have come straight from a Planned Parenthood pamphlet:

“I have my own beliefs, and those beliefs are very dear to me. One of them is that I do not impose my beliefs on other people. Many, many years ago, I had a dear, close family relative that was very close to me who passed away from an illegal abortion. It is since that time that my mother and my family have been committed to the belief that we can believe as we want, but we will not force our beliefs on others on that matter. And you will not see me wavering on that.”

So much for wavering. Romney is now a staunchly pro-life conservative, but the catalyst for his original opinion is worthy of exploration. Romney has never publicly identified the “close family relative” to whom he referred in the debate, but Salon published an article last year that recounted her sad experience as an unwed, pregnant woman in the years prior to Roe v. Wade. She was the younger sister of Romney’s brother-in-law, and was engaged to be married. However, her pregnancy was likely a source of shame and the whole matter was hushed up presumably to preserve the reputation of the family, including Romney’s father who was governor of Michigan at the time.

After the debate, Romney affirmed the position he had taken by saying that it “obviously makes one see that regardless of one’s beliefs about choice, that you would hope it would be safe and legal.” Apparently that observation is not so obvious anymore.

The matter might not have made much of a stir but for the fact that it was raised again today by the National Enquirer, whose typically sensationalized headline screamed “Mitt Romney Backstreet Abortion Shocker.” 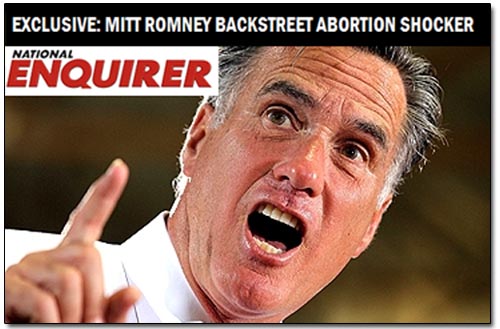 Regardless of the hyperbole of the source, the facts were all present in Salon’s earlier article. Now that the story is out there, it is fair to inquire as to how Romney feels today about the ordeal of his deceased relative. While the loss of a loved one should never become fodder for political gamesmanship, how such experiences shape the values of a candidate are highly relevant. If her loss had such a profound impact on him, even thirty years later when he was running for the senate, does he no longer feel that she, or any other women in her position, ought to have access to safe and legal medical attention?

Since Romney’s current position is to turn back the clock to a time when women had no alternative but the back alley procedures that were often fatal, can he say today that he is satisfied with the fate that his young relative suffered; that it was merely the consequence of her choice; that a young woman today, perhaps another relative, should be subject to the same fate were she to make the same choice?

Romney was once driven by his grief to make an unwavering commitment to never force his beliefs on others. Is he through with grieving? Is he comfortable with the grief that other families will suffer if his promise to repeal Roe v. Wade is fulfilled? Someone should ask Romney these questions.

One thought on “THE VETTING: Mitt Romney’s Brush With A Tragic Back Alley Abortion”