Dick Morris has done it again. I wouldn’t cover this ignorant gasbag if it wasn’t so much damn fun. He has absolutely nothing of substance to say and what he does say is certifiably bonkers. 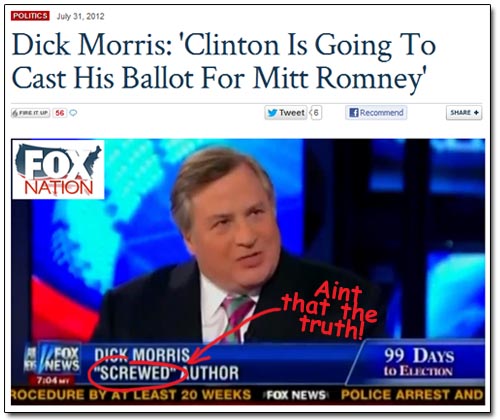 Last night on the Sean Hannity program on Fox News (not exactly a Mensa gathering either), Hannity introduced his theory that Bill Clinton would be a drag on President Obama’s reelection campaign:

Hannity: You know Bill Clinton better than anybody else. Now here is a guy that I suspect, before all is said and done, is gonna, in his own way, undermine Barack Obama’s reelection chances.

First of all, Morris has not had any relationship with Clinton for sixteen years, since he was fired when it was revealed that he had allowed a toe-sucking prostitute to listen in on conversations with the President. That’s the sort of character that compelled Fox News to hire Morris. In response to Hannity, Morris said this:

Morris: I guarantee you, Sean, based on what I have heard from third parties or I have spoken to that William Jefferson Clinton is going to cast his ballot for Mitt Romney. However, he’s going to open his mouth for Barack Obama because his wife is hostage. They have her under lock and key as secretary of state, and he is scared that Obama will lose and blame him if he undermines Obama. So he will do everything he asks him to do and then he will jab him whenever he can.

Of course. It’s so obvious. Right after Clinton officially nominates Obama at the Democratic convention he’s going to rush off and vote against him. As if denying Obama that one vote will counter all the positive PR his convention speech will produce. Morris thinks that a life-long Democrat is prepared to vote against a Democratic incumbent for president based on what he’s heard from third parties.

The business about Hillary, however, is the truly idiotic part of this. Morris seems to think that making a woman the most powerful diplomat in the world is equivalent to tying her up in the back room of a flop house. And if Clinton is so worried about being blamed for an Obama loss why would tell anyone that he that he is voting for Romney? Particularly anyone who would actually speak to Dick Morris.

The manure spread by Morris is high grade bullshit. And it’s something he does frequently. Take for example his 2008 book “Condi vs. Hillary,” which contained his astute prediction for the 2008 race in the title. That didn’t exactly pan out for him, did it? From the introduction to the book:

{T]here is no doubt that Hillary Clinton is on a virtually uncontested trajectory to win the Democratic nomination and, very likely, the 2008 presidential election. She has no serious opposition in her party […]

The stakes are high. In 2008, no ordinary white male Republican candidate will do. Forget Bill Frist, George Allen, and George Pataki. Hillary would easily beat any of them. Rudy Giuliani and John McCain? Either of them could probably win, but neither will ever be nominated by the Republican Party.

So Morris got the Democratic nominee wrong, despite his conviction that there was “no doubt.” He also got the Republican nominee wrong. And the Republican who Morris said could not be nominated, but would win if he were, was nominated but actually lost. Is there any way he could have been more wrong?

And now Morris delivers that sort of analysis on Fox News. It is perfectly aligned with the low bar for intelligence and reason that Fox sets for their pundits and anchors. And anyone who watches and believes this tripe deserves the howls of ridicule they will receive when they are inevitably proven to be as stupid as Morris et al.