A story today on Fox Nation featured a headline that other news organizations might have considered obscene: Press Pussies Soft on Obama. 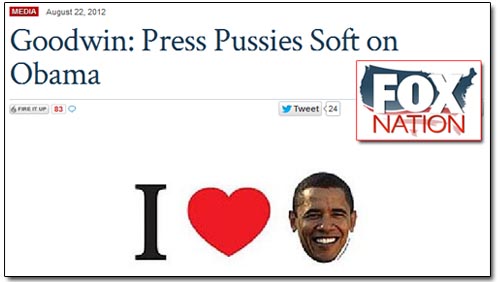 For the Fox Nationalists, obscenity is no barrier to another opportunity to smear the President. Anyone who doesn’t believe that Fox deliberately chose to use profane language that is a pejorative allusion to vaginas in order to emasculate their targets doesn’t know Fox very well.

The story linked to an article on Fox’s sister newspaper the New York Post by right-wing hack Michael Goodwin. The underlying article was a lame effort to disparage Obama’s press conference yesterday. Goodwin filled the column with nonsense attacks and ad hominem insults. He began by comparing Obama’s presidency with the scandal-plagued administrations of Richard Nixon and Bill Clinton. Of course, Obama has not had any scandals attributed to him, much less those with serious consequences like criminal break-ins and sexual misconduct.

What Goodwin thinks are equivalent controversies consist of the President having held fundraisers. Saints preserve us – a politician has engaged in soliciting donations! Then Goodwin is shocked – SHOCKED – that the President made a few references to his political opponents. That must be a first. Then, just before accusing Obama of lying “virtually every time he appears in public,” Goodwin outright lies by asserting that Obama leaked classified information for political gain. He made no effort to document that falsehood.

Goodwin went on to refer to the President as grubby, but then said that it was Obama who was taking the low road. He faulted Obama for “capitaliz[ing] on the nutso ‘legitimate rape’ comments of a GOP Senate candidate,” even though Obama was answering a question from a reporter. But in Goodwin’s delusional mind the reporter was a White House plant.

It should come as no surprise that when an ultra-right-wing enterprise like Fox News decides to employ profanity to attack their perceived enemies, they would choose one that is a derogatory reference to women. Yet somehow they still complain when they are criticized for engaging in a war on women.

For Goodwin to publish this column so soon after the lunatic ravings of Todd Akin demonstrates just how tone deaf the Republican machine is, and how insensitive they are to sexism and prejudice and the suffering of its victims.

5 thoughts on “Press Pussies? Fox Nation Resorts To Profanity To Attack Obama And The Press”