Wrapping up the Republican National Kvetch-a-Sketch, Mitt Romney delivered a barn-boring speech that nevertheless stirred the sheep in the convention hall. With a different theme every night, Romney chose to highlight a bold new message that is sure to resonate with the Replicant base:

So there you have it. Mitt Romney pledges to do “something.” That soaring rhetoric ought to inspire America’s voters. And consistent with his campaign to date, Romney refused to say specifically what that something would be. Contrary to the build up from Chris Christie and Paul Ryan, who hailed Romney as a leader who would tell the nation the “hard truths,” Romney stuck to soft platitudes and appeals to the disappointed demographic.

However, a familiar hint of a vision did emerge from both of the GOP’s standard bearers. Romney and Ryan united to express their shared belief in the spirit of collectivism and the sense that we, as Americans, are all in this together: 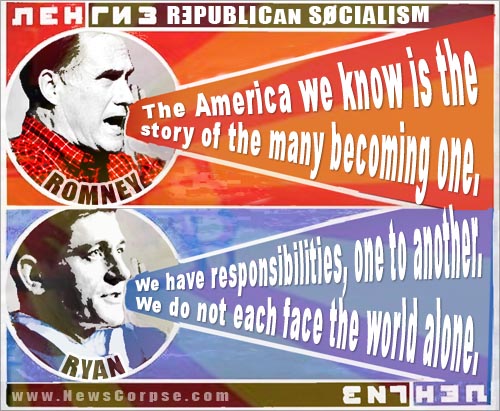 Romney: “The America we know is the story of the many becoming one.”

Ryan: “We have responsibilities, one to another. We do not each face the world alone.”

Those are admirable sentiments that reflect the views of many Americans who are committed to holding the nation together community by community. Even Chris Christie declared that “We all must share in the sacrifice.” The problem with those remarks is that, had President Obama made them, they would have been castigated by Tea-publicans as anti-American, socialist sermonizing. Fox News and talk radio McCarthyites would have built days of programming around such objectionable ravings.

But an even bigger problem is that Rom-n-Ry don’t mean what they say. Their philosophy leans more toward going it alone – an “I got mine” individualism that rejects social welfare and unity of purpose. The Republican model of shared sacrifice is lower salaries for teachers, lower benefits for seniors, and lower taxes for millionaires.

There’s going to be plenty of analysis in the media in the next couple of days of Romney’s speech on both its style and substance (although Clint Eastwood may have stolen the RNC finale, and not in a good way). However, much of the right-wing press has already dismissed fact-checking as a liberal plot to which they don’t have to pay attention. That’s convenient considering the frequency with which they lie.

Perhaps the most blatant falsehood in Romney’s speech was when he said “Unlike President Obama, I will not raise taxes on the middle class.” Not only has Obama cut taxes for the middle class, but Romney’s tax plan actually does raise their taxes. But the funniest misrepresentation was when he said that “My dad had been born in Mexico and his family had to leave during the Mexican revolution.” Romney left out the fact that his father had been born in Mexico because his grandfather, and his five wives, had to flee the U.S. in order to sustain their polygamy. I wonder why Romney glossed over that devotion to the institution of traditional marriage.

Update: This photo just came in off the wires of another hard hitting interview with Invisible Obama: