The cretins at Fox News have once again revealed their innate hostility, in general, and toward women specifically. The joint appearance of John Boehner and Nancy Pelosi at a groundbreaking ceremony for next year’s inaugural stage produced a photograph that inspired an offensive attempt at humor by Boehner and a despicable reaction from the denizens at Fox Nation. 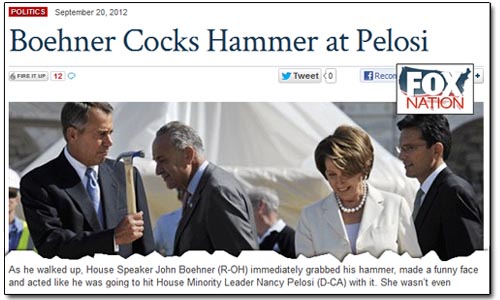 The title, “Boehner Cocks Hammer At Pelosi,” sets the scene for the bloodlust that will follow. Directly below the photo, Fox News writes…

“Very funny on-cam moments at the ceremony on the West front of the Capitol this morning. […] As he walked up, House Speaker John Boehner (R-OH) immediately grabbed his hammer, made a funny face and acted like he was going to hit House Minority Leader Nancy Pelosi.”

Oh, such funny on-cam moments. I can hardly catch my breath. The GOP Speaker of the House of Representatives pretends to murder the Minority Leader by bashing her skull in with a hammer. Boehner certainly has a sharp wit. And it’s not the least bit disrespectful, nor a veiled sanction of violence against women. What will those scamps do next?

Well, actually, for a sense of how this news was received by the miscreants at Fox Nation, take a look at a sampling of the comments: 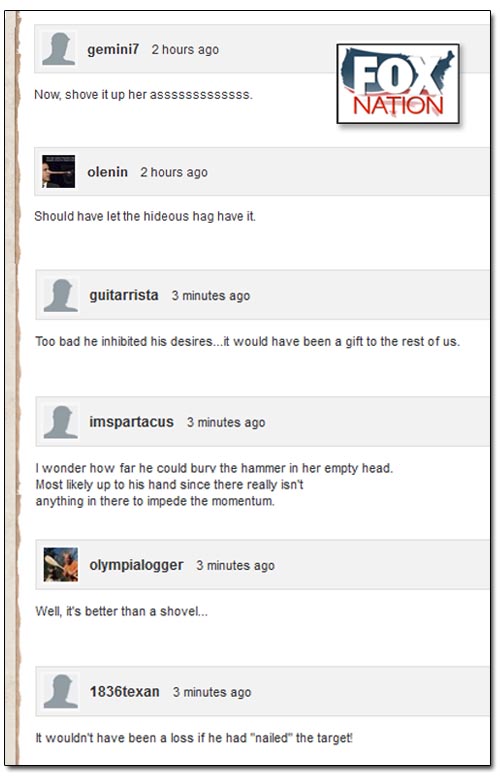 This is the character of the Fox Nationalists. They encourage this behavior. As of this writing, they have not removed any of these comments that openly advocate the assassination of an elected American representative, who also happens to be the first woman Speaker of the House in our nation’s history.

It’s one thing for a bunch of ignorant weasels to spew their violent wet dreams on the Internet, but it’s another thing entirely when their platform is the web site of a national, mainstream “news” network. This is not an isolated incident. Violent, racist, and other hateful rhetoric is a regular feature at Fox Nation. And President Obama is frequently the target. Ironically, the Fox Nationalists are also the first to castigate even mild expressions of dislike by liberals.

It goes without saying that these sort of boorish ravings are not the equivalent of the violence we are presently seeing in Libya, Egypt, and elsewhere. However, while the practical manifestation of these ideas is not the same, the mindset is identical. They both view their ideological enemies as subhuman and worthy of death. And they are both directing their anger at American representatives and policymakers. The right-wing in America behaves as if they hate this country as much as Al Qaeda does.

To make matters worse, they have Fox News to help them promulgate those views. It’s disgusting, divisive, and unpatriotic. And, unfortunately, it’s probably going to continue, and may even get worse, after Obama is reelected.