One of Mitt Romney’s most reality-detached comments of this campaign came when he declared that “We don’t have people that become ill, who die in their apartment because they don’t have insurance.” The Olympian ignorance of that remark says a lot about Romney’s elitist upbringing and orientation. The truth is that thousands of people die every year due to lack of health care coverage – more than 26,000 in 2010. And it isn’t just people who get sudden illnesses in their apartments, but people who have untreated and/or undiagnosed problems that lead to more severe disorders and fatalities.

“Even the idea that everyone gets urgent care when needed from emergency rooms is false. Yes, hospitals are required by law to treat people in dire need, whether or not they can pay. But that care isn’t free — on the contrary, if you go to an emergency room you will be billed, and the size of that bill can be shockingly high. Some people can’t or won’t pay, but fear of huge bills can deter the uninsured from visiting the emergency room even when they should. And sometimes they die as a result.

“More important, going to the emergency room when you’re very sick is no substitute for regular care, especially if you have chronic health problems. When such problems are left untreated — as they often are among uninsured Americans — a trip to the emergency room can all too easily come too late to save a life”

This is just common sense to everyone except Romney. But the part of Krugman’s article that is causing controversy came at the end: 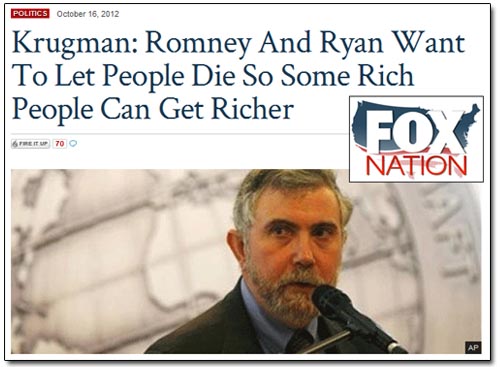 “So let’s be brutally honest here. The Romney-Ryan position on health care is that many millions of Americans must be denied health insurance, and millions more deprived of the security Medicare now provides, in order to save money. At the same time, of course, Mr. Romney and Mr. Ryan are proposing trillions of dollars in tax cuts for the wealthy. So a literal description of their plan is that they want to expose many Americans to financial insecurity, and let some of them die, so that a handful of already wealthy people can have a higher after-tax income.”

The outrage generated by this was expressed in a column by Daily Caller contributor, Jim Huffman. However, there is nothing in Huffman’s retort that attempts to rebut the substantive assertions by Krugman. He never bothers to counter the argument that thousands of Americans are at risk due to deficient or non-existent coverage. The entirety of his pique is aimed at a single sentence that Huffman interprets as Krugman alleging that Romney wants people to die.

First of all, Krugman’s statement actually refers to Romney’s “plan” that would have the effect of producing unnecessary deaths, not Romney’s personal bloodlust. But the more interesting part of Huffman’s article comes at the beginning where he writes…

“We all have heard, or read on the Internet, claims that President Obama is a Marxist and/or a Muslim extremist who wants nothing more than the downfall of America, and that he is willing to sacrifice American lives and prosperity to these ambitions. Maybe the few folks making those claims actually believe them, but there is not a shred of evidence they are true. In fact they are so preposterous no legitimate news outlets would report them as anything but the unsubstantiated nonsense they are.”

Apparently Mr. Huffman has never watched Fox News, or even read the web site his column appears on. Either that or he is admitting that Fox News and the Daily Caller are not “legitimate news outlets,” which would make more sense. Fox personalities from Glenn Beck to Eric Bolling to Sean Hannity, and more, have made overt references to President Obama as a Muslim, a Marxist, a socialist, a communist, a Kenyan, a racist, etc. And the Daily Caller, a web site run by Fox contributor Tucker Carlson, is every bit as bad. Huffman’s attempt to portray those ludicrous sentiments as the product of insignificant blogs backfires in the face of the truth: That the most prodigious disseminater of those vile lies is the heart of the right-wing media and the highest rated cable news network, Fox News.

The clincher is that Huffman’s article now appears st the top of the Fox News community web site, Fox Nation. So we have the unique circumstance of Fox News featuring an article that exposes Fox News as an illegitimate news source. That may be the first thing that Fox News has gotten right in sixteen years.

One thought on “Fox News, Daily Caller, Admit That Fox News Is Not A Legitimate News Outlet”