Apparently there were not already enough paranoid fantasies about President Obama circulating amongst right-wing conspiracy theorists. All that socialist, Muslim, Kenyan, Manchurian stuff is getting old and losing its capacity to invoke fear. So now these psycho Chicken Littles have a new nightmare to ponder: 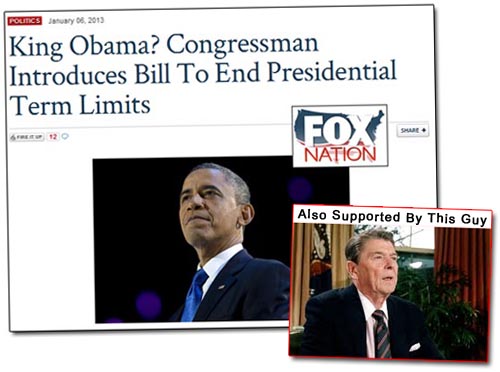 At Fox Nation they are all worked up about a bill just introduced by a Democratic congressman. Rep. Jose Serrano is proposing to repeal the 22nd Amendment to the Constitution that mandated that presidents could serve no more than two terms. To the Fox Nationalists that means that Obama is plotting to convert America into a monarchy with him on the royal throne.

To paraphrase H.L. Mencken, “Nobody has ever gone broke underestimating the intelligence of America’s Fox News viewers.” But the overarching stupidity of this misadventure truly boggles the mind. And that’s even if you set aside the fact that they are implicitly admitting that Obama would be reelected forever if he were permitted to continue running. Darn that democracy.

However, Constitutional amendments generally take years implement, They need to be passed by two-thirds of both houses of congress and then ratified by three-fourths of the states. If the Fox Nationalists think that’s going to occur at all, much less while Obama is still in office, they are in serious need of intravenous Xanax. What’s more, this amendment has been offered by Serrano in every congress since 2001, shortly after George W. Bush was elected. Was this Serrano’s attempt to crown Bush, or did he have secret knowledge that in the future an African without a birth certificate would inhabit the White House?

Republicans have also proposed repealing the 22nd, including Rep. Guy Vander Jagt in 1986, thinking it would allow Ronald Reagan to seek a third term. And speaking of Reagan, he was so supportive of this idea that he said he “would like to start a movement” so that people could “vote for someone as often as they want to do.”

Term limits were never a good idea. They are an undemocratic and artificial constraint that insults voters by treating them like children who cannot manage their own affairs. The problem with longevity in political office is the result of self-serving, gerrymandered districts and the fact that elections are dominated by wealthy special interests. If these corrupting influences were removed from the process, voters could be trusted to elect people who represent their interests and to remove those who do not.

And the beauty of democracy is that the idiots who buy into the nonsense that Fox Nation peddles would be overwhelmed by responsible citizens with reason and common sense, attributes that Fox works so hard to eliminate from the electorate.

23 thoughts on “Fox Nation vs. Reality: The ‘King Obama’ Delusion”