The news that Qatar-based Al-Jazeera has agreed to purchase Al Gore’s Current TV has stirred controversy throughout the mediasphere. For the most part the debate has been driven by conservative xenophobes worried that Sharia law would be imposed on American viewers via x-rays emanating from their television screens.

The usual suspects on the right have issued their predictably alarmist warnings about Al-Jazeera plotting to brainwash what they must regard as a gullible American public. Obviously their assessment of gullibility is based on their experience with Fox News viewers. The rest of us are quite capable of discerning fact from fiction and developing informed opinions from diverse news sources. But the censorious right-wingers insist on having only one mindset available to the U.S. television audience. 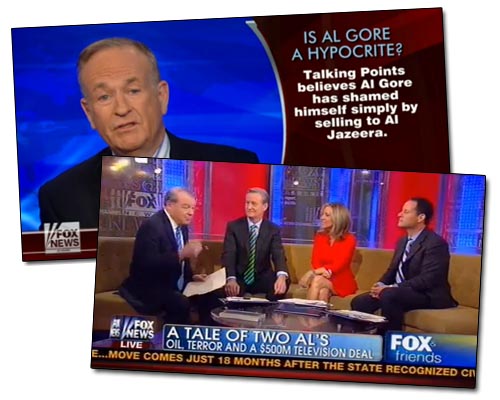 Some of the knee-jerk reactions from conservative critics include Bill O’Reilly saying that “Gore has shamed himself simply by selling to Al-Jazeera.” Frequent Fox News guest Matt McCall saying of Gore that “To me, he’s now associating himself with Al-Qaeda.” Glenn Beck complained that his own sham attempt to bid on Current was dismissed and therefore Gore is un-American. Stuart Varney of Fox News defended Beck by castigating Gore for rejecting Beck but saying “Okay [to] big oil, the sheikhdom of Qatar.” The uber-rightist Media Research Center’s Dan Gainor alleged that “lefties love Al-Jazeera” and then whined that “The purchase is part of a larger trend of foreign media outlets.”

There is a lot there to chew on. First of all, the trend toward foreign ownership of media outlets was never more pronounced than when Rupert Murdoch crossed the Atlantic to launch Fox News. And it is absurd to suggest that Gore is somehow more pro-Big Oil than those at Fox who defend foreign oil corporations while vehemently condemning the development of renewable, domestic energy sources, and disputing the scientific reality of climate change.

Much of the criticism aimed at Gore was directed at his having cashed out to a state-based media enterprise. For some reason these alleged free-market proponents are all of a sudden opposed to a businessman making a profitable deal that will advance economic activity and create jobs. As for the involvement of the nation of Qatar as the financial backer of the new network, these small-minded critics conveniently forget that the second largest shareholder of News Corp, outside of the Murdoch family, is Alwaleed bin Talal, a prince of the Saudi royal family. And therein lies another hypocrisy. The critics complain falsely that Al-Jazeera is aligned with terrorists, but if they are intent on forming ludicrous associations between news networks and terrorism, they might do better to recall that the plotters and hijackers on 9/11, including Osama bin Laden, were from Saudi Arabia, not Qatar.

[Note: Qatar is friendly to the west, is a major supplier of natural gas to the U.S., and has been an ally in American military endeavors including in Libya and Syria, as well as providing bases for the United States Central Command in support of forces in Iraq and Afghanistan]

What’s more, Fox is engaging in their own unique brand of terrorism by literally inciting terror in the minds of their viewers. The demonstrably false allegations that Fox continues to spread about President Obama are designed to create a sense of dread. They have built a fear factory that alleges that Obama is deliberately trying to destroy America on behalf of the extremist Muslims they believe he was invented to represent. They assert that he will become a tyrant who will abolish the Constitution, confiscate guns, criminalize religion, and condemn dissenters to prison camps. It’s a brand of fright-inducing journalism that has the potential to result in actual hostilities. In fact, it already has. (More examples: the murder of Dr. Tiller; the mass shootings at the Wisconsin Sikh Temple; and the Beck-inspired gunman who was apprehended on his way to kill people at the offices of the ACLU and the Tides Foundation).

There has also been a great deal of commentary about the quality of the journalism produced by Al-Jazeera. Most of the conservative echo chamber has trashed the network. But as that haven of Islamic propaganda, the Wall Street Journal, has noted, the network “has gained plaudits for its international coverage.” Indeed, it has won numerous awards, including the prestigious Polk and Peabody awards. They have also been honored by the Foreign Press Association and the International Emmys. Compare that to the recognition received by Fox News from these organizations that judge journalistic excellence – which amounts to zero awards.

14 thoughts on “Fox News vs. Al-Jazeera: Tales Of Terror And Hypocrisy”