Here are a collection of asinine headlines from the Fox News community web site, Fox Nation. As usual, they illustrate the petulant ignorance and immaturity of their editors. 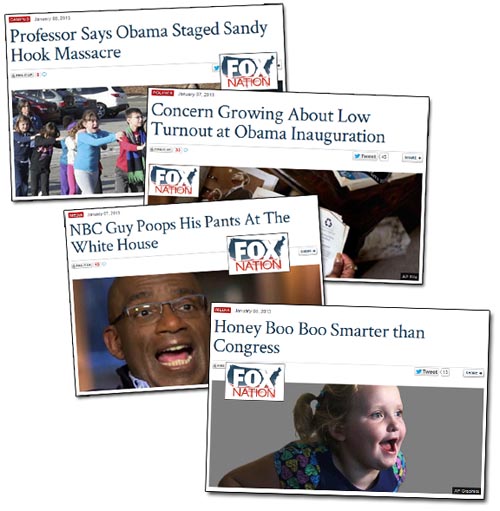 The first item promotes an over-the-top conspiracy theory that “Obama Staged Sandy Hook Massacre” (which I predicted would occur three weeks ago). This nonsense was spewed by an obscure professor at a Florida (where else?) university. There are plenty of idiotic notions floating around on the fringy right, but for Fox to take this and give it the audience boost that their web site provides is unprofessional and irresponsible.

The next item is representative of how Fox just gets everything wrong. On the same day that this story ran alleging concern “About Low Turnout at Obama Inauguration,” it was reported that tickets to Obama’s inaugural ball and parade were sold out. Actually, through a glitch in Ticketmaster’s system, the tickets, which were supposed to go on sale Monday, were accidentally made available on Sunday night. By Monday morning there were none left. The Inaugural Committee may have some concerns, but low turnout is not amongst them.

Number three concerns number two (sorry). There really is nothing more to say about this than that Fox editors made a decision to feature it on their web site demonstrating that the emotional maturity of their editorial staff is on par with the subject of the next item.

Finally, Fox posts a headline saying that Honey Boo Boo is smarter than congress based on a story that never said that. The source article actually says that Honey Boo Boo’s mother is putting her earnings in a trust fund that will pay out when she turns twenty-one. So perhaps they could argue that the mother is smarter than congress, but clearly the IQ of the editors at Fox trails little HB2, since they couldn’t even figure out what the article was about.

3 thoughts on “FoxBites: Honey Boo Boo Smarter Than The Editors Of Fox Nation”