The nation is once again grieving the senseless loss of innocent life at the hands of a mentally unstable gunman. Compounding the tragedy, this time the majority of victims were children. As President Obama said this afternoon…

“As a country, we have been through this too many times. Whether it’s an elementary school in Newtown, or a shopping mall in Oregon, or a temple in Wisconsin, or a movie theater in Aurora, or a street corner in Chicago — these neighborhoods are our neighborhoods, and these children are our children. And we’re going to have to come together and take meaningful action to prevent more tragedies like this, regardless of the politics.”

Unfortunately, the politics will eventually seep into this as it always does. Gun rights advocates may try to evade a public debate by claiming that it is inappropriate to discuss responsible gun policy after a notorious crime, but in truth there is no better time. And waiting until the nation is crime-free would mean putting off the debate forever (which, of course, is their intent).

The President’s message explicitly addressing the need for meaningful action is bound to set off a flurry of paranoia from the Second Amendment set. It is just the sort of soundbite that triggers their imaginations. During the campaign, NRA president Wayne LaPierre wrote in a fundraising letter that Obama’s re-election would result in the “confiscation of our firearms” His proof of that was the fact that Obama had not taken any actions against gun ownership throughout his first term. To LaPierre, and many other right-wingers, that meant that Obama was lulling gun owners into a false sense of security and that Obama would proceed with the gun roundup in his second term. Of course, Fox News was a principle proponent of these conspiracy theories. Here are a few headlines from Fox’s community web site Fox Nation:

There were similar conspiratorial prophesies percolating in the midst of the “Fast and Furious” affair. Many conservative pundits and politicians believed the whole thing was a covert plot to impose stricter gun laws in the United States. Tea Party Nation founder Judson Phillips said as much on Fox News earlier this year.

“This was purely a political operation. You send the guns down to Mexico, therefore you support the political narrative that the Obama administration wanted supported; that all these American guns are flooding Mexico, that they’re the cause of the violence in Mexico and therefore we need draconian gun control laws here in America.”

So I’ll give it about forty-eight hours before some gun nut charges that Adam Lanza was an Obama operative sent to Connecticut to create havoc that would open the door for federal agents to clamp down on the rights of gun owners to possess assault weapons and other military grade munitions that our Founding Fathers could never have imagined. It could be Glenn Beck or Rush Limbaugh or Allen West or Michelle Bachmann. There are plenty of delusional crackpots on the right who could advance this theme. And if all else fails, the NRA could take it up themselves. Seriously…I wonder how long it will take them to run an ad like this: 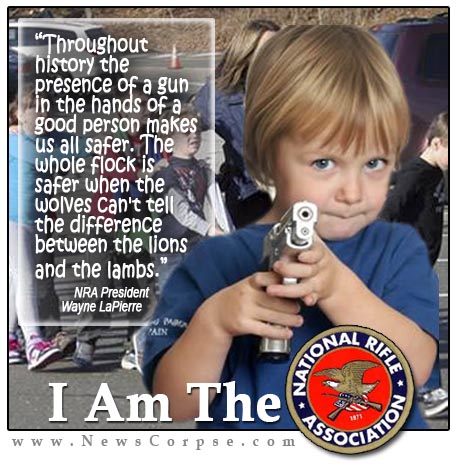 Today America is mourning again. We all send our condolences to the families of the victims. But the most meaningful thing we can do for them is to start tomorrow to insist that rational and reasonable steps be taken to prevent tragedies like this from happening in the first place. That means adopting a sane approach to gun ownership and compassionate access to mental health care. Not to do so would be to rub salt in the wounds of everyone who has lost a loved one to gun violence, and it would also be an invitation for more of these horrific events in the future. We need to stop this, and we need to do it now.