Seconds after the first inauguration of President Obama, Chris Wallace of Fox News speculated that he wasn’t really president because the oath was flubbed by Chief Justice John Roberts. That suggestion that Obama was not a legitimate president foreshadowed what would become a cacophony of Birthers and Republicans determined to reject any and all of what Obama put forth.

On this morning’s broadcast of Obama’s second inauguration, Fox News continued their dismissive coverage of the President. They led it off with the kiddies at Fox & Friends who exhibited their respect for this historic day by reporting what an awful day it is.

Steve Doocey: “As if a cold Monday in January wasn’t dreary enough, today has been dubbed ‘Blue Monday’, the most depressing day of the year.”

I’m quite sure that the day of Obama’s inauguration is decidedly depressing for the these remedial, right-wing buzzkills. But Fox was not through casting aspersions on this day and the President. Immediately following the inaugural address, Fox’s panel of sourpuss pundits picked apart the speech, which they universally agreed was a partisan screed aimed at bashing the GOP.

Chris Wallace: “This was an unyielding, uncompromising espousal of a liberal agenda.”
Brit Hume: “This is utterly bereft of an outreach to the opposition.”

Never mind that the President repeatedly spoke of how the nation’s greatest accomplishments were achieved by working together and how that was a necessity for moving forward today in light of the difficulties that lie ahead. Fox is positioning itself for another four years of blind opposition to anything that might help this president – or this country while this president is in the White House. 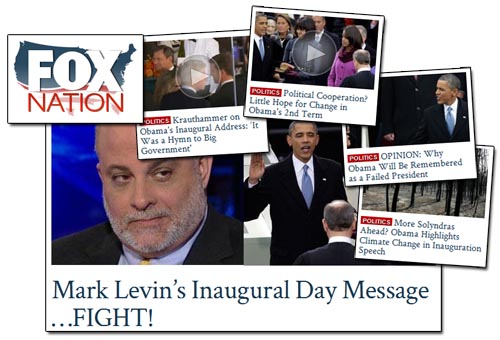 Their community web site, Fox Nation, went to even further extremes to disparage the President with at least five derogatory articles by virulent Obama adversaries, including their headline piece featuring Mark Levin who was quoted from a Breitbart interview where he ripped the President in the most repulsive terms.

Levin: “I think there’s a lot of perverse thinking that goes on in Obama’s mind, radical left-wing thinking. He was indoctrinated with Marx and Alinksy propaganda.”

And this is how Fox News covers Obama on the day of his inauguration, a day usually set aside to celebrate America’s democratic principles and offer best wishes for the new administration’s efforts to meet the challenges facing the nation. We can hardly wait to see what Fox is dreaming up for tomorrow, or the next day, or the next four years. And Fox wonders why they are shunned by the White House.

10 thoughts on “Fox News Covers the Obama Inauguration: ‘Saddest Day Of The Year’”