It simply never ceases to amaze how Fox News can clutch to such fantastical versions of reality and attempt to pass them off as reasonable analyses of current events. Witness this item wherein they grouse about MSNBC’s hiring of a former Obama campaign aide: 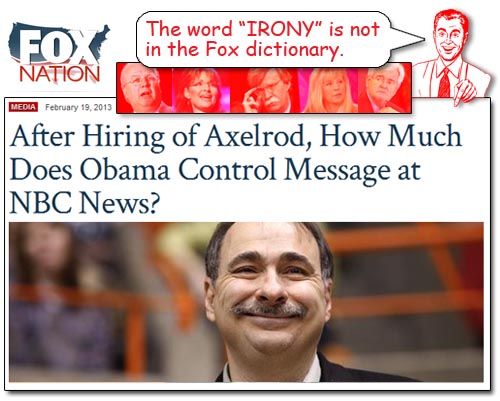 First of all, do they really think that the addition of David Axelrod to the MSNBC roster of contributors is going to substantively alter the network’s programming? Considering the fact that they already regarded MSNBC as “in the tank” for Obama, how would Axelrod change that?

Secondly, The Fox Nationalists conveniently forget that MSNBC also has on its payroll the former head of John McCain’s campaign (Steve Schmidt) and the former chairman of the Republican Party (Michael Steele). Does that mean the the GOP is controlling the message at NBC News?

Finally, Fox News has been notorious for employing Republican operatives and candidates. These are people far more instrumental to the messaging of the Republican Party than Axelrod ever was for the Democrats. They include much of George W. Bush’s “brain” trust (i.e. Karl Rove, John Bolton, Liz Cheney), and party leaders like former Speaker of the House Newt Gingrich, and their just past nominee for VP Sarah Palin.

Fox is, without a doubt, the PR arm of the Republican Party. Their anchors are as much responsible for GOP propaganda as their well-connected contributors. No one at MSNBC has anywhere near the tight relationships that Fox has with the GOP. And Fox doesn’t have any Democrats on staff that balance their reporting in an equivalent way (sorry, Kirsten Powers and Juan Williams don’t cut it). When Fox gives a former chair of the Democratic Party the air time that MSNBC gives to Steele, or when they give a three hour morning block to a liberal Democratic host (i.e. MSNBC’s conservative Joe Scarborough), then maybe Fox can talk about messaging without being so desperately hypocritical.