The War on Christmas is the latest fabrication from the theo-con hack factory. Its premise is that a cabal of secularists are conspiring to deprive America of its Christmas celebration. But despite the protestations that this is a matter of faith by Christian Ayatollahs like Jerry Falwell (who has initiated a Christmas Friend or Foe campaign), it was Bill O’Reilly who revealed that this is really a matter of profit not Prophet. 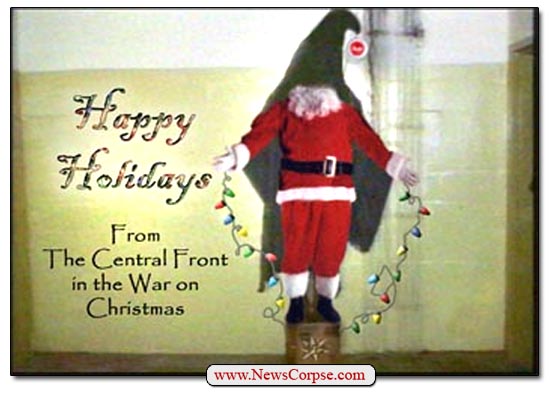 On his TV program, O’Reilly said:

There you have it. Christ died on the cross for your net receipts and a favorable business environment. That’s a far cry from the guy who threw the moneychangers out of the temple.

The fact is that demagogues like O’Reilly, Falwell, Sean Hannity, John Gibson (whose book The War on Christmas, was released just in time for holiday shopping), and others, are using this manufactured controversy in much the same way that retailers use Christmas. It’s a way to exploit popular culture to increase exposure and profits. But what happened to trusting the market? If these hypocrites truly believed in the free market they purport to worship, then why don’t they let the market decide if campaigns extolling Happy Holidays have appeal to consumers. Not only are they unable to practice the economic values they espouse, they take it much farther by actually integrating Christmas into the economy.

The argument going around is that the economy would suffer devastating losses were there no Christmas. The moronically simplistic justification for that position is that, since people buy things during the Christmas season, if there were not one, they would not buy things. However, it seems unlikely that the money now spent on gifts would get sucked into some fiscal black hole absent this seasonal excuse to consume. Without Christmas, people would still spend their money on themselves and their families. They may put it into retirement or college funds, in which case it would still eventually be spent and circulate through the economy. And even if they just kept it in the bank, the increased personal savings rate would prime economic growth. Where’s the loss?

It should be noted that the exploitation of Christmas as a political cudgel is nothing new. In 1959 the John Birch Society issued a pamphlet titled “There Goes Christmas?!” that warned:

“One of the techniques now being applied by the Reds to weaken the pillar of religion in our country is the drive to take Christ out of Christmas — to denude the event of its religious meaning.”

“The whole record of the Jewish opposition to Christmas, Easter and other Christian festivals, and their opposition to certain patriotic songs, shows the venom and directness of [their] attack…And it has become pretty general. Last Christmas most people had a hard time finding Christmas cards that indicated in any way that Christmas commemorated Someone’s Birth…Now, all this begins with the designers of the cards.”

Here I must make a confession. I am the designer of the cards, and Jewish to boot. I am an artist with a small business wherein I market my artwork on cards, magnets coasters, etc. In fact, the image attached to this article is available at my website, Crass Commerce, along with many more works of fine art, humor, and politics. And need I remind you that they make wonderful Christmas presents.

I can’t say that I’m serving the interests of a secular cabal, but at least I’m contributing to the cornucopia of consumption that O’Reilly, et al, must certainly regard as sacrosanct.