On last night’s broadcast of the The Ed Show, Ed Schultz announced that he would be taking his program to a new weekend slot beginning in April. Thursday will be his last broadcast in primetime. His statement came at the end of the program and said in part…

Schultz: “I raised my hand for this assignment for a number of personal and professional reasons. My fight on ‘The Ed Show’ has been for the workers and the middle class. This new time slot will give me the opportunity to produce and focus on stories that I care about and are important to American families and American workers.”

His statement implies that the move was his choice. However, there are some conflicting accounts of this and a report in the New York Times last November speculated that Schultz’s time slot might be offered to MSNBC contributor and frequent fill-in host, Ezra Klein.

As it turns out, it will be Chris Hayes taking over Schultz’s time period. Hayes is editor-at-large for the highly respected Nation magazine and is currently a host of a weekend morning program on MSNBC, “UP with Chris Hayes.” His selection affirms the appeal he has generated on his show and as a guest host for Rachel Maddow and others.

While the change for Schultz appears to be a demotion from primetime to the weekend ghetto, the details of the move may suggest some benefits. His new show will air on both Saturday and Sunday from 5:00 to 7:00pm. This means that his new show will be twice as long as the old one. You can do a lot more in a two hour format if you’re creative with segments, field production, and guests. And he will end up having nearly as much weekly time as he had before the move. 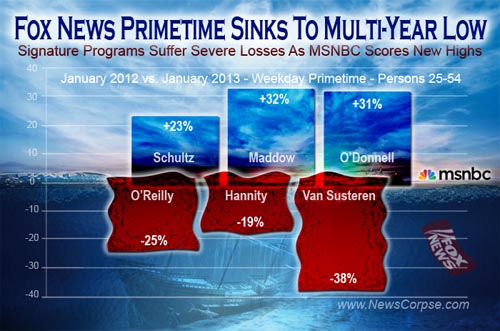 Schultz’s ratings were growing at a steady pace, although he was no match for Fox’s number one program, The O’Reilly Factor. At the end of last year he posted a 54% gain compared to O’Reilly’s 22% decline. Then again in January he scored a plus 23% to O’Reilly’s minus 25%, as Fox sunk to a twelve year low.

Last year I proposed some programming changes for MSNBC that would assist them in taking advantage of their post-election ratings surge. One of those was to give Schultz the Hardball repeat at 7:00pm and find another host to put up against O’Reilly and anchor the primetime block. Hayes was a possibility at the time, but not my choice. He is a smart and engaging host, but not the sort of personality that could compete with O’Reilly. If MSNBC is interested in taking the leap from contender to champ they need to take some risks.

One possibility would have been to develop a non-conventional format with a team of hosts. My suggestion was John Fugelsang and Joy Reid. They could produce a show that incorporated serious policy discussion along with a sense of humor and a nod to popular culture. That might have been an effective way to counter-program Fox and set up the evening’s later programs with something lighter and more broadly appealing. Perhaps MSNBC will consider such a program to replace Hayes on weekend mornings where they may be more comfortable experimenting.

As with everything in the television business, time will tell. MSNBC has been enjoying substantial gains lately, while Fox News has been suffering severe losses. Whether these trends will continue long enough for the networks to swap places in the standings remains to be seen. And CNN isn’t standing still either with their new boss, Jeff Zucker, whose influence is already being felt in significant ways. The end result is that 2013 is bound to be a year wherein the cable news business suffers the ancient Chinese curse of “living in interesting times.”