The Christmas Wars:
It has suddenly become clear why Fox News has been so fixated on inciting a “War on Christmas.” It must be because the Christmas season has been devastatingly cruel to Fox News. This year the Nielsen ratings left a smoldering lump of coal in Fox’s stocking despite all the pandering they did to Old St. Nick. Apparently Fox was very naughty. Santa doesn’t approve of lying and, perhaps, viewers are getting tired of it as well (see Fox News Fux Up: The 12 Worst Wrongs Of 2012). 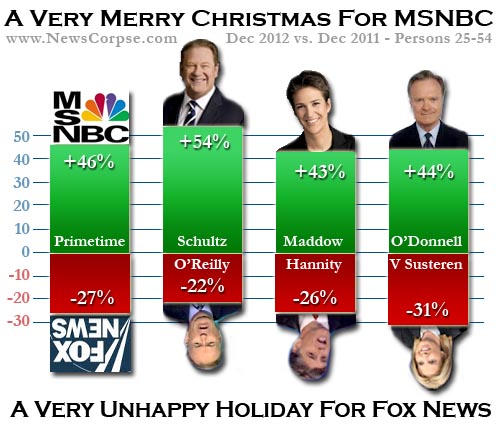 Maddow and O’Donnell Jingle Fox’s Bells:
For the month of December, two-thirds of the Fox News primetime lineup came in second to MSNBC (in the critical 25-54 year old demographic). The Rachel Maddow Show’s monthly average came in 4% above the formidable Fox fixture, Sean Hannity. Lawrence O’Donnell had an even better advantage of 11% over his weaker competition, Greta Van Susteren.

This was a stark difference from last year when Hannity comfortably led Maddow by 46% and Van Susteren outpaced O’Donnell by the same amount. Those leads have now completely evaporated. Only Bill O’Reilly has managed to keep his fat head above water, although his 69% December 2011 lead over Ed Schultz was cut nearly in half in 2012 to 40%.

December 2012 was an affirmation of the superior performance MSNBC has shown since the election in November. Maddow and O’Donnell have consistently defeated Hannity and Van Susteren since President Obama did the same thing to Mitt Romney. This can no longer be explained away by Fox defenders as mere depression on the part of conservative viewers who tuned out after an electoral spanking. That excuse may have made sense for a week or two, but not a full two months later with high profile news events like the “fiscal cliff,” new cabinet appointments, Benghazi hearings, the Petraeus scandal, and the Newtown school shooting dominating news coverage.

Happy New Year:
Fox may have to get used to coming in second, or maybe even third if CNN’s new president, Jeff Zucker, is able to get that network out of idle. And if MSNBC is smart they will start to firm up their schedule with new shows and dynamic personalities. For instance, they should quickly axe the Hardball rerun at 7:00pm, perhaps moving Schultz to that time slot. Then put in his place a leadin to Maddow that takes advantage of the smart brand of analysis and commentary that she and O’Donnell represent. That would tie up their primetime package and boost the network’s reputation generally, which would help draw viewers to other dayparts.

Unsolicited programming advice for MSNBC:
Poach comedian/pundit John Fugelsang from Current TV and pair him up with MSNBC contributor Joy-Ann Reid for a combo news and entertainment hybrid to launch the evening block. A news program that intelligently presents serious issues with a sense of humor could be a compelling option that would ease their audience into a deeper dialog as the night progresses.

[Update 1/4/13] MSNBC has reported their 2011/2012 year-over-year ratings and the numbers are starkly positive compared to their competition. They are up in most categories by double digits (for both total viewers and the 25-54 demo), while Fox News had only slight gains or declines. In fact, both O’Reilly and Hannity delivered their lowest demo performance since 2007. Both Maddow and Donnell were number one for the year in the 18-34 demo, giving them a head start on next generation of viewers.