It’s not bad enough that Fox News operates a community web site that is riddled with lies, but they also frequently demonstrate a level of incompetence that would embarrass a remedial high school newspaper. 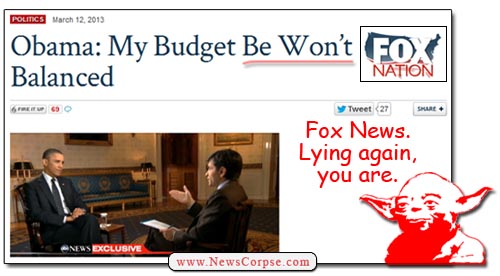 Perhaps I’m being too hard them. Maybe their syntax here was meant to compliment Obama by portraying him as having the wisdom of Yoda. Or maybe they hired Sarah Palin to write their headlines. Or, of course, they may just be emulating their racist perception of Ebonics. In any case, the gist of their article is incontestably false.

The Fox Nationalists are characterizing Obama’s remarks as a rejection of the goal of balancing the federal budget. Now, that would be a perfectly reasonable position to take because in a recession many economists argue that economic growth has a higher priority than balanced budgets. However, it is not the position that Obama is taking,. In the interview Obama gave to ABC’s George Stephanopoulos he very clearly articulated his interest in balancing the budget:

“Balancing the budget in part depends on how fast you grow. You remember– you were in the Clinton administration. The reason that you guys balanced it was a combination of some tax hikes, some spending cuts, and the economy grew.

“And, so– you know, my goal is not to chase– a balanced budget just for the sake of balance. My goal is how do we grow the economy, put people back to work, and if we do that we’re gonna be bringing in more revenue. If we’ve controlled spending and we’ve got a smart entitlement package, then potentially what you have is balance. But it’s not balance on the backs of, you know, the poor, the elderly, students who need student loans, families who’ve got disabled kids. That’s not the right way to balance our budget.”

Any fair reading of that statement would recognize that the President is focusing on balancing the budget, but doing it in a way that is compassionate, intelligent, and doesn’t make America’s less fortunate shoulder the burden for the wealthy. It most definitely is not Obama saying that his budget won’t be balanced (or be won’t balanced either). This is just another example of Fox misrepresenting the facts in order to whip their ill-informed audience into a frenzy over a fabricated controversy.

One thought on “Fox Nation vs. Reality: On Obama’s Budget The Balancing Of”