In recent days Fox News has ramped up coverage of the Philadelphia trial of an abortion doctor accused of numerous horrific crimes. To be clear, the spike in coverage was not about the underlying facts of the case or the suffering of the patients. It was about Fox’s contention that the prosecution has been ignored by a liberal press corps for political reasons. 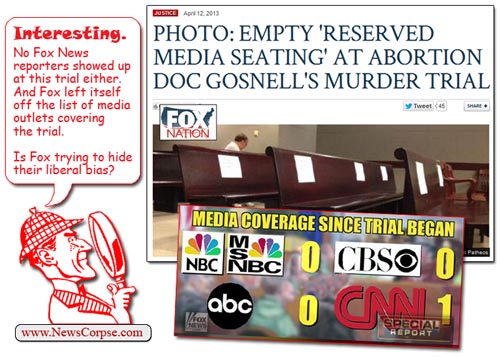 First of all, we need to set aside the false notion that the media has any incentive to suppress reporting on this case due to a liberal bias. The alleged criminal acts committed by this doctor run counter to the values of the pro-choice community whose position is that restrictions on safe and legal reproductive services are what is responsible for creating the conditions from which rogue clinics like this one emerge in the first place.

However, for Fox to get huffy about a media blackout orchestrated by liberals stretches the boundaries of hypocrisy. On numerous segments in the past week Fox has castigated other media outlets for not having covered this trial. The problem with that complaint is that Fox hasn’t covered it either. Nevertheless, Bret Baier hosted a segment of his “Special Report” wherein he read off a list of the offenders in the press who have ignored this story. Conspicuously absent from the list was Fox News. If Fox had indeed reported the story, they would certainly have included the number of times on their graphic to shame their competitors. They left themselves off because their performance was no different than the rest.

In another example of Fox’s self-serving spin, they posted a photo of the seating area in the courtroom that was reserved for the media. The fact that there was no one sitting there was evidence to Fox that the press was negligent and biased. However, also revealed by the photo was that no one from Fox News was sitting there either. They presumably thought that that little detail would just slip by unnoticed by their viewers (and they were probably right. Their viewers are not known for their intellectual prowess).

Clearly Fox’s editorial decision-making is drenched with bias and self-promotion. We can easily ascertain what is important to the network by their programming choices, and apparently the Philly doctor’s trial was not important to Fox. So what was important?

Fox’s closest competitor in the ratings is MSNBC. In the months following the election MSNBC has demonstrated surprising growth while Fox has lost audience share, slipping to levels it has not seen since 2001 (although still maintaining its lead). Consequently, Fox has resumed their onslaught against MSNBC which they escalate whenever they feel threatened.

The latest attack by Fox deals with a promo that MSNBC ran in support of their weekend anchor Melissa Harris-Perry. The promo features Harris-Perry delivering an uncontroversial commentary about the value of society investing in education and child welfare. To Fox, that commonly held principle of a unified family of American citizens was tantamount to Maoist socialism. Fox blanketed their airwaves with exasperated outrage day and night over this 30 second ad. In fact, as reported by MSNBC’s Chris Hayes, Fox committed more than 15 times the airtime to MSNBC’s promo than MSNBC did. 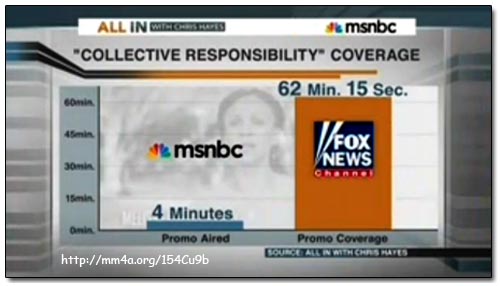 In conclusion, an analysis of the distribution of time allocated to content tells us that Fox is obviously more concerned about how MSNBC advertises its own programs than they are about heinous criminal activity. And when their attention is drawn to the heinous crimes, they only seem to care about how other media reports it (ignoring their own failures), and not the crime itself or the victims. Remember this the next time you hear Fox complaining about not being taken seriously as credible journalists.

3 thoughts on “Perverted Priorities: The Editorial Hypocrisy Of Fox News”