On the Fox News community web site Fox Nation (whose grip on reality is suspect), the top featured story today is an article from the uber-conservative blog Human Events with the provocative headline “Obama’s Plan Hatched at Columbia University.” 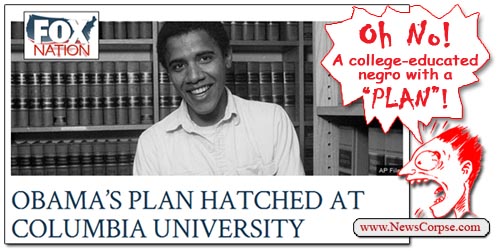 The article by diehard birther Wayne Allyn Root begins by asserting that a poor child of a single mother grew up to become the first African-American president of the United States despite being “hostile and resentful towards anyone who has achieved self-made success through American values.” And it gets even crazier from there.

Root’s premise is that while he was a student at Columbia University “Obama and his Marxist cronies hatched a secret plan to destroy our country.” Root apparently has some personal knowledge of this nefarious plot as a result of his being a classmate of Obama. Where he acquired his information is a mystery since he admits that while at Columbia he “never met him, never saw him, never even heard of him.” Having established that as the shaky foundation for his expose, Root speculates that the reason their paths never crossed was because Obama “was busy attending communist party meetings.” Along with everything else in Root’s harangue, that bit of speculative nonsense is unsupported and untrue.

Root then relates a story about how he had learned of the assassination attempt of Ronald Reagan while in class, and the response of his classmates. “They cheered. They clapped,” Root says. “They yelled, they high-fived, and whooped in sheer unadulterated joy.” Once again, there is no corroboration of this account, but the next revelation from Root’s imagination is even more surreal and unfounded. He said that “if Obama actually went to Columbia, he’d almost certainly have to have been in that class leading the cheers.”

That sentence is ripe with a dementia fermented in hatred. Root prefaces his remark by questioning whether Obama was in the class at all. In fact, it is one of his primary hypotheses that Obama’s academic history is a complete fabrication. But he doesn’t let his own lunatic theories stop him from placing Obama in the classroom anyway. And after inventing Obama’s presence (and remember, Root claims to never have even seen him), Root assigns to him the mantle of leadership. So Root’s position is that Obama must have been in the classroom leading the cheers despite having never seen him and not believing he was ever a student there at all. Makes perfect sense – if someone laced your Twinkies with LSD. “But wait,” Root exclaims, “The most frightening and eye-opening is still to come.”

The horrific plot Root has uncovered is based on “a detailed plan designed by two former Columbia professors named Cloward & Piven.” Here Root is borrowing from the moth-eaten, psychotic ramblings of Alex Jones, Glenn Beck, and other conspiracy theorists who have mangled the teachings of Cloward and Piven for years. They assert that a scheme is underway to overweight the welfare system until it collapses the economy. Root alleges that Obama “is using that plan to destroy America, capitalism, and the U.S. economy right in front of our eyes.”

The objective of destroying America and its economy is never revealed by Root or any of his deranged predecessors. Certainly a bankrupt nation would not be an ideal starting point for a power mad socialist since there would be no funding available for the welfare state he allegedly seeks to form.

More to the point, the only evidence of any policy that has approached an end result of collapsing the economy is the policy of the previous Republican administration and its right-wing overseers. These lackeys of Wall Street, defense contractors, and multinational corporatist interests brought our nation closer to insolvency than anything since the crash of 1928 and the Great Depression.

For Root to stir the historical facts into a soup of cranial mush that contradicts his own wingnut crackpottery is not surprising. He is merely plagiarizing the dimwitted, paranoid fears of the many Psycho-Chicken Littles that have preceded him with panicky tales of Cloward, Piven, Soros, Alinsky, et al. However, it is notable that Fox News has seen fit to headline this tripe as if it were newsworthy – or even sane. And to those pundits who suggest that Fox has moderated its fringy, tea-sotted extremism as a result of the drubbing they took last November, clearly that is not the case.