In what has become a sad ritual following any crime or disaster, the weasels obsessed with scoring political points are among the first to slither out from the slimy media crevices they call home. The bombing in Boston yesterday is no exception.

Conspiracy crackpot Alex Jones predictably accused the government of following up on its “staged” series of “false flag” deceptions that include the shootings in Aurora, Colorado and Newtown, Connecticut. ThinkProgress has a disturbing collection of similarly repulsive outbursts. But one that was left out was Fox News contributor and Bill O’Reilly fill-in Laura Ingraham, who used the occasion to implicate immigrants in the bomb attack. 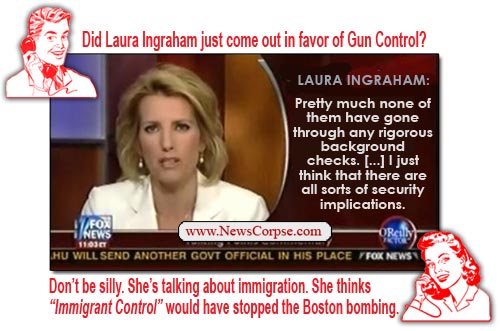 Ingraham took to her radio pulpit this morning to advance her racist theory that America is in danger as a result of what she considers lax border security. She said…

“This, in my mind, raises all sorts of questions. I mean, again, we don’t know who did this, motivations, all of that. But it is interesting that at this moment — we are considering legalizing or giving regularized status to millions of people. Pretty much none of them have gone through any rigorous background checks, to have a temporary status in the United States. And we don’t — I just think that there are all sorts of security implications aside from the other arguments on immigration — national security implications that we don’t talk about with enough frankness and I think certitude here. We can’t stop every attack, but my goodness, if we had borders that were shut down and we actually had a proper screening process, maybe we could stop some of them.”

Ingraham doesn’t explain why “this moment” following the Boston bombing should cause concern over “giving regularized status” to undocumented immigrants who have lived in this country peacefully for years. She is simply insinuating, without foundation, that there is some connection between immigrants and terrorists. She offers no examples of any immigrants who came to the country illegally who have committed acts of terror (the 9/11 perpetrators entered the country on legal visas). And she doesn’t seem to regard the possibility that the Boston bomber might be an American citizen and pseudo-patriot like Timothy McVeigh or Eric Rudolph.

Furthermore, the tone of Ingrahams’s lament is strikingly similar to another public debate that is currently raging. While she is a vocal opponent of enhancing gun safety through new legislation, she seems comfortable with “background checks” for people seeking to become U.S. citizens, but not for people with fetishes for assault weapons and munitions stockpiles. She asserts that “proper screening” could stop terrorist activity that she cannot identify, but assails any effort to conduct such screenings to prevent the mass murders that are a grim part of our recent history.

If opportunistic hypocrites like Ingraham exercised greater reason and logic they would understand that access to military-style weapons (and explosives) pose a far greater danger than foreign-born persons whose only desire is for work, opportunity, and liberty. Then they might refrain from making offensive comments that demonstrate nothing but their intolerance and ignorance. One can only hope.