In one of the most stunningly idiotic opening statements ever presented in a court of law, Don West, co-counsel for the defense of George Zimmerman, somehow managed to conclude that it would be appropriate to tell a knock-knock joke at the commencement of a murder trial with the parents of the deceased teenage victim sitting a few feet away (video below). West prefaced his turn at comedy by saying that “Sometimes it is necessary to laugh to keep from crying.” This was obviously not one of those times as West proceeded to strike out with the stunned jury. 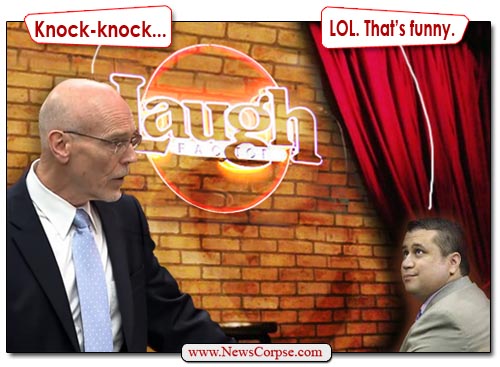 The only plausible explanation for this severe mental aberration is that the defense is already trying to set up a cause for appeal based on incompetent counsel. The jury sat in such abject silence after the alleged joke that West beseeched them for a response pleading “Nothing?” Then, after a break, the lawyer returned to continue his opening remarks, but started off with an apology and blaming his delivery for the lack of comedic punch.

What’s worse is that the point of this particular joke is an overt insult to the members of the jury. It was a slap at the ignorance of the panel for their having been selected based on how little they knew about current events. He was telling the jury that they were sitting in this courtroom because they are a bunch of morons who never heard of a notorious criminal defendant.

That’s not exactly the best way to win over an audience. It’s probably premature to presume that this counsel has permanently lost credibility with the jury, but he certainly has dug himself a deep hole that will take considerable effort to climb out of. If this flub signals anything, it’s that the defense has very little of substance to hang their case on, so from the outset they are throwing up irrelevancies and distractions. Look for more of that in the coming weeks.