Last week’s tragedy in Norway has left the world stunned. The magnitude of the bloodbath is difficult to comprehend. As news of the massacre began to trickle out, speculation was rampant as to the perpetrator and the motive.

Not surprisingly, much of the early accounts falsely alleged an Al Qaeda connection. However, as facts started to infuse the reporting, it became clear that the suspect, Anders Breivik was an extremist, fundamentalist Christian, with harshly bigoted views toward Muslims, immigrants, and leftists. His manifesto resembled the ravings of Glenn Beck with talk of cultural Marxism and Islamic colonization. Yet even after Breivik’s motives were disclosed, the right-wing media has engaged in brazen finger-pointing and insensitivity toward the victims and other innocent parties. For instance…

1) A writer on Andrew Breitbart’s BigPeace website set out to whitewash Breivik’s right-wing Christianity: “This Norwegian terrorist was not a Christian or a conservative. He acted contrary to the teachings of the Bible and conservatives from Burke to Madison. He was instead a jihadist, blinded by an ideology who resorted to violence…”
While Breitbart’s crew is anxious to disassociate mainstream Christians from this atrocity, rightists in America rarely offer that distinction to Muslims who regard terrorists like Bin Laden as apostates and not representative of their faith.

2) On the other hand, CNN’s Erick Erickson unapologetically went after Muslims anyway: “The fact of the matter is violence and Islam may not be very common among American Muslims [sic], but internationally it is extremely common and can fairly well be considered mainstream within much of Islam.”
Remember, this was after Erickson learned that there was no Islamic connection to the massacre. It was also after he had accused Muslim’s of the crime before Breivik was captured.

3) A writer at RedState went off a cognitive cliff to claim that “We live in a world where we are perfectly happy to abort millions of children and then DEMAND to know WHY Anders Behring Breivik became the human sarcoma that he truly is.”
Never mind the fact that we already know that Breivik’s assault was spurred by his hatred for multiculturalism, the RedStaters, like all wingnuts, are determined to find a way to lay blame on any handy tenet of progressivism. Remember Pat Robertson blaming Hurricane Katrina on the gays?

4) Mark Steyn of the National Review is stumped as to why there have been allegations of Islamophobia: “So, if a blonde blue-eyed Aryan Scandinavian kills dozens of other blonde blue-eyed Aryan Scandinavians, that’s now an ‘Islamophobic’ mass murder?”
It is if he knew that Breivik explicitly targeted people associated with Norway’s Labour Party, whom he blamed for promoting multiculturalism.

5) Brian Kilmeade on Fox News queried his guest: “Are you surprised somewhat that western newspapers, in this case The New York Times seem to be jumping on the fact — they’re trying to equate Christian, what they say are Christian extremists, with Muslim extremists?”
Kilmeade utterly failed to grasp the irony that just hours before he and his network were baselessly accusing Muslims of committing the mass murder. Now he’s worried about the reputation of Christians despite the fact that the shooter was a Christian.

6) Professional Islamophobe, Pamela Geller of Atlas Shrugs found a unique way to blame Muslims even after she knew they were not involved “Anders Behring Breivik is responsible for his actions. If anyone incited him to violence, it was Islamic supremacists. If anything incited him to violence, it was the Euro-Med policy.
So according to Gellar, Muslims are responsible for violence that they cause themselves, as well as for violence caused by others who hate them.

7) After first asserting that the perpetrators were likely to have been Muslim terrorists, John Hinderaker of the PowerLine blog dug in saying “Was that wrong? Not at all. Any time mass murder attacks take place, it is not just likely but highly probable that they are the work of Muslim jihadists..”
This conveniently leaves open the opportunity to blame every future act of terrorism on Muslims, whether they are responsible or not.

8) As Norway mourns, it’s clear that the right-wing media has been boiling over with surreal speculation that is both derisive and bizarre. And you can’t allude to bizarre derision without acknowledging Glenn Beck, whose unconscionable remarks exceed all the other by disparaging the actual teenage victims even before they have been laid to rest.

“As the thing started to unfold, and then there was a shooting at a political camp, which sounds a little like the Hitler Youth, or whatever. I mean, who does a camp for kids that’s all about politics?”

Well, for one there is Glenn Beck’s own 912 Project that sponsors the “Tampa Liberty School,” a Tea Party-themed getaway for schoolchildren ages 8-12. But that doesn’t excuse Beck’s inference that the slaughtered camp-goers were akin to Hitler’s youth brigades.

All of these examples of ignorant bigotry took place AFTER it was known that the gunman was not Muslim, but an extremist Christian and far right activist. Not surprisingly, the conservative press was just as blindly prejudiced in their initial reactions to the breaking news.

CNN’s Erick Erickson Tweeted: “Terrorist bombing in Oslo. I bet you it was not Lutherans who did it.” Another writer at Andrew Breitbart’s BigPeace web site said: “Norway has a big Muslim problem. Before long we should know if Norway’s problem has just blown up in its face.” The author failed to provide a definition of what constitutes a “Muslim problem,” but it sounds disturbingly similar to what was once referred to as the “negro problem” in many of America’s southern states. Apparently he considers any presence of Muslims to be a problem. Filling in for Bill O’Reilly, Laura Ingraham announced “two deadly terror attacks in Norway, in what appears to be the work, once again, of Muslim extremists.” Jennifer Rubin of the Washington Post said that “there is a specific jihadist connection here.” Thomas Jocelyn of the Weekly Standard said that “in all likelihood the attack was launched by part of the jihadist hydra.”

The despicably bigoted opinions expressed by the prominent, establishment commentators above reveal a dark and disturbing side of American conservatism. Their views percolate throughout the rightosphere and infect the broader community of conservatives. That endorsement of hate results in even more extreme views, like those expressed by this member of the Maine Tea Party: Man of the YEAR 2011 – Anders Behring Breivik!!! 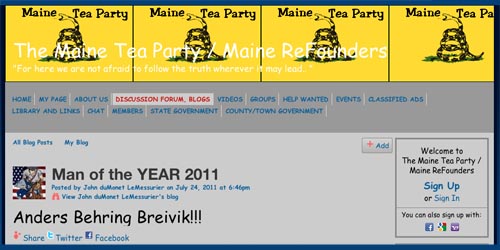 If cooler (saner) minds don’t rise to moderate this overt hostility, the potential for more of this violence will persist, and there is no reason why it would not occur here in the United States. In fact, right-wing extremists have already demonstrated their capacity to do harm, as the survivors of Dr. Tiller, or the targets of Byron Williams will inform you. And lest we not forget Timothy McVeigh’s attack on a government that his militia-bred philosophy viewed as too liberal.