During his post-midterms press conference, Donald Trump reignited his incendiary assault on the free press, which he refers to, in Stalinist terms, as “the enemy of the people.” It was a disgraceful display of infantile tantrum throwing by our crybaby president who is too weak to face a group of reporters without breaking down into insults and bullying.

The big news from the press conference in this regard was Trump’s overheated conflict with CNN’s Jim Acosta. Trump berated him repeatedly as “rude” and unfit to be working for CNN (as if Trump is the authority on CNN’s staffing). Acosta’s offense was trying to get Trump to answer a question about his racist characterizations of the refugee “caravan.” [Side Note: notice how that issue has disappeared from Trump’s bag of distractions?] The matter was later escalated by the White House, who suspended Acosta’s pass to the premises and falsely accused him “placing his hands” on an intern who tried to grab the microphone away from him.

However, overlooked in the dust up with Acosta was the fact that he was not the only one that Trump went after. He also had words with three other long-time White House reporters from reputable news agencies. In the course of his often incoherent and childish ranting, Trump attacked these journalists as well:

To Peter Alexander, NBC: “Well I’m not a big fan of yours either, to be honest.” and “What, are you trying to be him [Acosta]?”

To Yamiche Alcindor, PBS: “Why do I have my highest poll numbers ever with African-Americans? […] That’s such a racist question.”

It is not inconsequential that two (make that three) of these reporters were black women, and that one of them was accused of being racist. The late addition of Abby Phillip, an African American reporter for CNN, adds to Trump’s hostility toward black women reporters. For the record, Trump’s approval rating with African-Americans is actually only three percent. But when the cumulative effect of Trump’s cowardly whining is taken fully into account, it reveals a president who is actively at war with, not just the press, but the Constitution.

And that assessment is affirmed by Trump’s recent threats to pursue retaliatory investigations of his Democratic critics, and his overt warning to his own Republican colleagues to “say goodbye” if they don’t wholly “embrace” him.

These are not the acts of an American leader who respects the principles that this nation stands for. These are the acts of a wannabe dictator who is determined to usurp powers that breach the standards set by our Founding Fathers. Trump clearly is more anxious to emulate Vladimir Putin and Kim Jong Un than George Washington or Abraham Lincoln. And the American people – and the Congress that supposedly represents them – must not stand for it. Those who even passively allow Trump to continue down this path are complicit in his treason.

This has been a dreadful week for Donald Trump. His efforts to invent a so-called “SPY” scandal revolving around his collusion with Russia have fallen flat. His on-again, off-again summit with North Korea’s Kim Jong Un have made him look impulsive and irrational. He was caught gaslighting the nation by denying that his own spokesperson exists. He ludicrously tried to blame Democrats for his administration’s disgusting policy of separating immigrant children from their parents. And on Memorial Day our draft-dodging president tweeted a tribute to himself rather than to fallen soldiers. 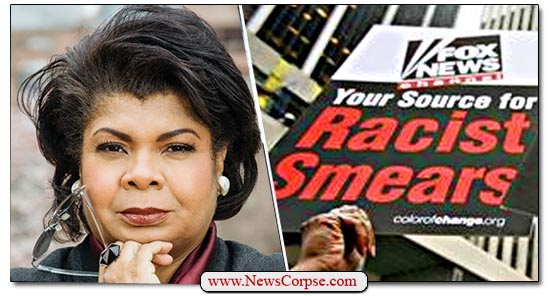 Consequently, State-TV (aka Fox News) had get its wheels spinning to produce their customary Trump-fluffing defenses of the President or, in lieu of that, some efficient diversions. With regard to the latter, Fox News conjured up a fake controversy about one of their favorite foils in the press, April Ryan, White House correspondent for American Urban Radio Networks. Ryan is well known for taking Trump’s press secretary, Sarah Huckabee Sanders, to task for brazenly lying during the White House press briefings. So the Trump regime has at least two reasons to want smear Ryan: She’s honestly critical, and she’s black. She also has a new book out: Under Fire: Reporting from the Front Lines of the Trump White House.

On Saturday Robert Gearty of Fox News Digital published a story online that falsely accused Ryan of stepping out of the bounds of journalistic ethics. The article was headlined: “CNN’s April Ryan slammed for tweeting article about Trump running child-trafficking ring.” “Ryan is being criticized,” Gearty said, for retweeting “a story in The Root that asks if the Trump administration is involved in child sex-trafficking.” Gearty continued with a statement by Melania Trump’s spokesperson lecturing Ryan on the “core purpose of a journalist.” And he filled the remainder of the article with some random tweets criticizing Ryan.

The objections that Fox was raising about Ryan concerned her retweet of an article from the black politics and culture website “The Root.” That article was headlined: “Is the Trump Administration Running a Child-Trafficking Ring or Nah? Follow Me Down the Rabbit Hole.” Going by that headline alone, Fox News leaped to the conclusion that Ryan was charging the President with aiding and abetting child trafficking. The Fox headline explicitly declares that the article in The Root made a factual allegation about Trump engaging in illegal acts involving children.

Of course, a reading of the short article reveals that it was just the opposite. The author, Jason Johnson, was pointing out the irony of how Trump and his minions in the rightist media will try to turn anything negative about Trump’s critics into a Trumped-up scandal. But that the left leaning media doesn’t do that. Case in point, the stories about the Trump administration’s policy of ripping apart immigrant families, and the fact that some of the kids are now missing in the system and thought to be in the hands of child traffickers. But The Root’s article was not charging Trump with anything other than a heartless anti-immigrant, anti-family policy. Johnson writes that…

“…none of this means that Jeff Sessions and Donald Trump are part of some vast conspiracy to sell minority children to the highest bidder like some scene out of Taken 4: Bad Hombres. […] However, why be hamstrung by the facts, as bad as they are? Trump has shown America that you can get away with whatever salacious, ridiculous and unfounded conspiracy you want as long as you say it loudly enough and find enough other people to repeat it.”

Clearly Johnson was criticizing those who leap to unfounded conclusions. But Fox News took that and immediately leaped to an unfounded conclusion. And it didn’t stop there. Fox’s media reporter, Brian Flood, engaged Ryan in a Twitter debate on this subject (see Twitter thread below) wherein he not only doubles-down on the false charge against Ryan, he also implies that either Ryan’s readers, or Twitter users generally, are shallow idiots who only read headlines. Maybe he’s just referring to the Fox News audience, in which case – no argument there.

The bottom line is that Fox News made a thoroughly false accusation against Ryan based on their inbred biases and inability to read a short article. Then they attacked Ryan further for calling them out on it. And these were Fox’s media reporters who so completely fail to understand their own job or do the slightest bit of research in order to report accurately. But then, accurate reporting is contrary to the mission of Fox News and would likely result in their termination if they were to do any.

So apparently fox just wants to slam me for clicks. and never read the article I retweeted either. Lol! So sad! Hello it said the conspiracies were unfounded. You just need me to hate. Thank you!! ? https://t.co/RCOqr1J0x8