The second presidential debate is now a part of history, and that’s not just a figure of speech. In a campaign that has set ugly precedents and breached common standards of decency from its inception, Donald Trump has once again lowered the bar. He has let his inner dictator emerge in full view of millions of viewers and citizens. 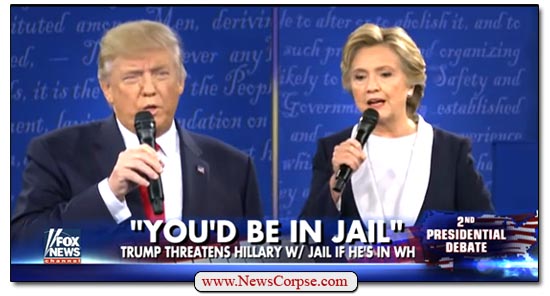 During a debate wherein Trump engaged in free-range falsification of reality, there was one moment that stood out. It was an exchange in which Trump took the extraordinary position that as president he would instruct his Attorney General to appoint a special prosecutor to investigate Hillary Clinton.

TRUMP: “I didn’t think I’d say this but I’m going to say it, and I hate to say it, but if I win, I am going to instruct my attorney general to get a special prosecutor to look into your situation.
CLINTON: It’s just awfully good that someone with the temperament of Donald Trump is not in charge of the law of our country.
TRUMP: Because you’d be in jail.

The “situation” to which Trump referred has to do with Clinton’s emails and the private server she used. Never mind that an extensive investigation was already completed by the FBI. While they found some room for criticism, they concluded that there were no actionable violations of the law.

Trump, however, doesn’t care about the law as evidenced by his prejudgment to jail Clinton before any investigation or trial. It’s a position that stands in stark contrast to every legal precept in a democracy. Former Attorney General Eric Holder noted that in a statement saying “In the USA we do not threaten to jail political opponents.” George Bush’s press secretary Ari Fleischer agreed saying that “Winning candidates don’t threaten to put opponents in jail. […] Trump is wrong on this.”

For the most part the media recognized the aberrant legal analysis that Trump was proposing. Like much of what he says on any subject, he demonstrated his pitiful lack of knowledge or even basic understanding. Here are a few examples of how the press views Trump’s ludicrous threat.

WOLF BLITZER, CNN: We got an excellent moment right now to discuss something I’ve never heard in any of these debates before between two presidential candidates […] One candidate says not only is he going to put forward a special prosecutor to investigate his rival, but he’s going to put her in jail if he’s elected president of the United States. That’s pretty extraordinary.

JOY REID, MSNBC: We need to not speed past the point that an American candidate for president threatened to jail his political opponent. […] This happens in Malaysia, this happens in Uganda. This does not happen in the United States of America.

RACHEL MADDOW, MSNBC: Donald Trump also said, in one of the most provocative comments of the evening, he said that if he was president, he would jail his political opponent. He would put Hillary Clinton in jail. That is the sort of thing that we usually decry in other countries, in authoritarian countries.

PAUL KRUGMAN: Let’s be clear: a candidate for president promised to put his opponent in jail if he wins. Everything else is secondary.

DAVID FRUM, speechwriter for George Bush: Who would consent to serve as Attorney General to a president who believed he could direct prosecutions of his political opponents?

By contrast, Fox News presented a somewhat different perspective. Their primetime star Bill O’Reilly gushed that “That’s the smartest thing he did all night because that, just that, coalesced his base back together.” And contributor Scott Brown said that “It was the line of obviously, I think, the election, the debate process. […] it was a home run. I thought he won the debate.” Nowhere on the “fair and balanced” Fox News was there a contrary opinion like that expressed by Clinton’s campaign spokesman Brian Fallon:

“That is the comment of a dictator that you expect to hear in a banana republic — the idea of jailing your political opponents.”

And that pretty much sums it up. Trump has presented himself as a narcissistic authoritarian from the outset of his campaign. His racist proposals to ban immigrants on the basis of religion; his incitement of violence toward protesters; his proclamations that “I alone” can defeat ISIS, or reform the tax code, or repeal ObamaCare, or end street violence. These are all indications of Trump’s belief that as president he can act unilaterally and impose his will the nation. And let’s not forget his open hostility to the media upon whom he promised to seek revenge.

These are the thoughts and actions of a budding tyrant. Anyone who can contemplate putting Trump at the head of the U.S. government and military is playing with fire. Trump has shown us who he is, and it’s a frightening picture of autocratic oppression. If he were to become president, Hillary Clinton would not be the only opponent he would throw in his gulag. Guantanamo would be packed with his critics and any random liberals who offend him.