“It’s not that the reporters covering the president are bad at their jobs. Most are experienced journalists at the top of their game — and they’re wasted at the White House, where scoops are doled out, not uncovered. The day of a typical White House correspondent consists, literally, of waiting to be told things.”

That’s an excellent point. Why would news organizations want to assign their top talent to staged briefings where they would have almost no opportunity to break a significant story? The only problem with Cox’s article is that it is at least two years too late.

In May of 2006, I posted an item based on the musings of NYU journalism professor, Jay Rosen. The article addressed comments made by Bush Chief of Staff, Josh Bolton, who seemed to be considering ending the White House briefings. Rosen pointed out that ending the briefings was a two way street that could just as easily be exercised by the press. All they would have to do is stop showing up. Rosen went further to propose what is still an appealing alternative.

“Send interns instead to occupy the seats without asking questions or filing reports. That means no correspondents at the two daily briefings, none on the President’s plane, none at his public appearances. (Except for foreign trips where other heads of state might speak.) Let the White House publicize itself.”

If not interns, junior reporters would certainly be able to perform the stenographic services required in the briefing room. They could even ask pretty decent follow-up questions when necessary. In the meantime, the newsroom all-stars could be out raking up muck like they are supposed to be doing; like they were trained to do; like we, the news consumers, want them to do. Should anything of consequence occur (i.e. the President introduces his new puppy), it could be texted to a more experienced hand without even leaving the chair. But when was the last time something important was divulged in one of these gatherings?

Certainly the White House manipulates these briefings for their own purposes, but in a sense, that’s their job. They are political by definition. The press, however, have a thoroughly different job – to coax transparency from government officials who are usually adverse to volunteering it. But rather than fulfilling that mission, much of the White House press corps is more concerned with scoring invites to cocktail parties and dinners with the same officials they are supposed to be covering.

All too often, White House press events are exploited by ego-driven reporters who like to see their mugs on TV. For this reason they frequently pose questions that are artificially provocative in order to raise their buzz quotient. At the other end of the spectrum are the partisan hacks that seek to make a name for themselves by embarrassing the press secretary or the President. Just last week, this guy asked a question with a comically false premise that was dripping with derision: 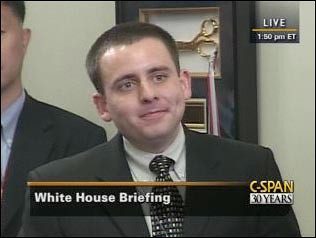 “Tomorrow is tax day and a number of conservative groups are organizing these so called “tea parties” across the country; there are going to be grassroots uprising revolts against the administration’s policies so far. Is the President aware that these are going on and do you have any reaction to this?”

[By the way, if anyone knows who this guy is, please leave his name in comments. I have been unable to identify this Jeff Gannon wannabe] … [Update: This may be Jim Geraghty of the National Review]

As for the notion of reassigning cub reporters to the briefings, it’s still a good idea, but not one likely to be implemented any time soon. Too bad. It’s shame we have to watch the people who ostensibly earned the top positions in their field, sitting in rows like school children being lectured by the teacher. And if they really are the best, then who does that leave to do the real work of pounding the pavement and looking under rocks? It’s a system that rewards mediocrity.

In recent weeks, there has been a flurry of stories that test the boundaries of publishing when classified data is involved. The NSA wiretapping affair, phone companies handing over records to intelligence agencies, and the tracking of the SWIFT financial transactions. Now, the deans of several big dog journalism schools are weighing in with an op-ed in the Washington Post: When in Doubt, Publish.

On the whole, they present a decent argument that is fully conveyed in the opening sentence, “It is the business — and the responsibility — of the press to reveal secrets.” How I wish the press would undertake that responsibility more often. A full reading of the article, however, seems to water down the premise. They describe the journalist’s dilemma as, “choosing between the risk that would result from disclosure and the parallel risk of keeping the public in the dark.” But the risk of keeping the public in the dark, while significant, is not the only risk that lack of disclosure portends.

By choosing to suppress information that is deemed classified, the press is enabling the government’s proclivity for avoiding oversight. The deans acknowledge that governments have made national security claims in the past, when all they were really concerned about was their own political necks. But it goes even deeper than that. Since the executive branch gets to decide what gets classified, they are in the position of being able to cover up criminal acts by simply classifying the evidence. We’ve even seen variations of this in the legal arena with investigations into the administration that were halted when Justice Department lawyers were prohibited from pursuing leads because they lacked security clearances, the issuance of which is also within the purview of the administration being investigated.

Jay Rosen at PressThink, tackles the question of how to cover a classified war. The essay is illuminating and worth reading in full (but stay out of the comments. After the first couple of dozen they get trampled by trolls). Rosen unveils an administration fighting a war that has no generals or governing authority. But the War on Terror, nonetheless, has operations that are shielded from the public by classification. When the New York Times raised questions about those operations, congress passed a resolution condemning the media for endangering national security. At the same time, we have pundits like William Bennett asking, “Who elected the media?” to decide what information the public is entitled to receive. The question itself is irrelevant. The press gets its rights from the Constitution, not the ballot box. Thank heaven for that, because try to imagine the state of journalism if the inverse were true.

This is the most secretive administration in history. They have classified more documents than any before it. They are even re-classifying tens of thousands of documents that have been available for years. They go around the traditional oversight provided by the courts and congress. Even congressional allies are starting to recoil. Rep. Peter Hoekstra (R-MI), chairman of the House Intelligence committee, sent a letter to the White House complaining about not having been informed of programs that the law requires be disclosed to the committee.

A free press is expected to be independent and to function with a healthy dose of skepticism. If the press cannot independently analyze government, even with respect to what the government claims should be classified, what good is the press? Should it obediently bow before the government’s royal edicts? Or should it cherish the freedom to think critically and act in accordance with that freedom? 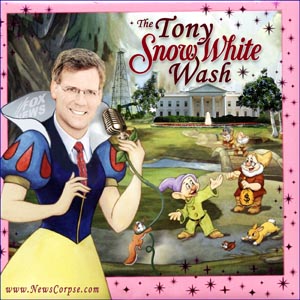 Jay Rosen at PressThink wins the “Best Idea Of The Year Award” for this little piece of brilliance in response to Josh Bolton, the White House Chief of Staff, who hinted that he may end the daily press briefings:

“End the briefings! I suppose it would never occur to Bolten that such a decision also belongs to the people being briefed. If Snow turns out to be McClellan with better hair, the press ought to quit the briefing room and give up on getting explanations from the White House. Beat Bolten to the punch, in other words.

By “quit” I mean pull your top talent. Send interns instead to occupy the seats without asking questions or filing reports. That means no correspondents at the two daily briefings, none on the President’s plane, none at his public appearances. (Except for foreign trips where other heads of state might speak.) Let the White House publicize itself.”

Just imagine it. Tony Snow steps behind the podium and gazes out to a room of youthful and unfamiliar faces. He stumbles uncomfortably with his opening statement and then opens the floor to questions…..

Maybe he will muddle through some topics the Communications office planned to highlight, but all he would see is a pack of kids hurriedly scribbling down what he’s saying. On first blush it may seem like everything the White House has ever dreamed of – a corps of stenographers. Except for two things:

We can only hope.