The videos of Syrian children suffering and dying from chemical bombings are almost too awful to watch. But even as Donald Trump castigates Assad, he pivots to blame President Obama for the atrocity. Trump’s public comments so far manage to produce nothing but bluster and impotent finger-pointing. He chastises Obama for not having done enough, but over the past couple of years Trump has repeatedly argued for doing nothing at all. 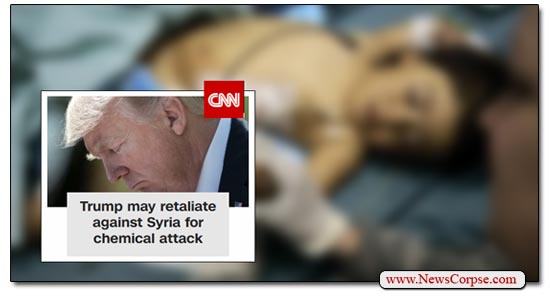 Now CNN is reporting that:

“President Donald Trump has told some members of Congress that he is considering military action in Syria in retaliation for this week’s chemical attack, and recognizes the seriousness of the situation, a source familiar with the calls tells CNN.”

In light of that news, let’s revisit his Twitter posts for the past three years:

We should stop talking, stay out of Syria and other countries that hate us, rebuild our own country and make it strong and great again-USA!

Most people do not know what Presient Obama is going to do to save his legacy. I do! He's got to get back to basics.Forget Syria-FIX THE USA

Obama must now start focusing on OUR COUNTRY, jobs, healthcare and all of our many problems. Forget Syria and make America great again!

Don't attack Syria – an attack that will bring nothing but trouble for the U.S. Focus on making our country strong and great again!

President Obama, do not attack Syria. There is no upside and tremendous downside. Save your "powder" for another (and more important) day!

AGAIN, TO OUR VERY FOOLISH LEADER, DO NOT ATTACK SYRIA – IF YOU DO MANY VERY BAD THINGS WILL HAPPEN & FROM THAT FIGHT THE U.S. GETS NOTHING!

What I am saying is stay out of Syria.

If the U.S. attacks Syria and hits the wrong targets, killing civilians, there will be worldwide hell to pay. Stay away and fix broken U.S.

The President must get Congressional approval before attacking Syria-big mistake if he does not!

Those last two tweets have particular significance. Any military action has the potential of going awry. Civilians are too often the victims, even in well-intentioned missions. And already Trump has presided over more than 1,400 civilian casualties in Syria and Iraq, according to some reports. More than 200 in one incident alone. And he’s been in office less than three months. Is this what he meant during the campaign when he said that he would “bomb the hell” out of ISIS?

Also, it will be interesting to see if Trump will comply with his demand to get congressional approval before taking any military action. Needless to say, Trump has not exactly been a bastion of consistency. But on this matter he will be challenged by his Republican colleagues on Capital Hill. Sen. Rand Paul has already said publicly that he will oppose any military moves on Syria without authorization from Congress.

There really are no good solutions to this problem. Surface level analyses that advocate sending in the Marines will almost certainly result in painful losses. That includes both innocent Syrians and American troops. But more complex combinations of diplomacy and international cooperation are seemingly beyond Trump’s mental capacity to comprehend. And none of these routes guarantee a desirable outcome.

Unfortunately, America is now burdened with a leader who has no experience addressing these kinds of problems. Nor does he have any relationships with other world leaders. And he has recruited a staff that is just as unfit as he is. Does anyone really think that Jared Kushner or Rex Tillerson will find a path to peace? That leaves us with little more than crossed fingers and anxious hopes that the Pentagon will muster up some common sense and be able to exert some influence over our incompetent president. It isn’t much to hang onto, but it’s all we’ve got.