Fox News has broadcast another of their signature demonstrations of callous disregard for human life. On a segment of Friday’s episode of Fox and Friends, the “Curvy Couch” potatoes addressed the subject of detention facilities for undocumented immigrants. The gist of the story was that the detainees had it way too easy and deserved much harsher treatment. 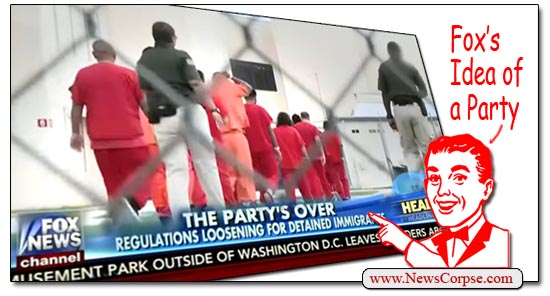 The Fox News segment was in response to Donald Trump’s plans for tougher immigration rules. As reported in the New York Times:

“For more than 15 years, jails that hold immigrants facing deportation have had to follow a growing list of requirements: Notify immigration officials if a detainee spends two weeks or longer in solitary confinement. Check on suicidal inmates every 15 minutes and evaluate their mental health every day. Inform detainees, in languages they can understand, how to obtain medical care. In disciplinary hearings, provide a staff member who can advocate in English on the detainee’s behalf.

“But as the Trump administration seeks to quickly find jail space for its crackdown on illegal immigration, it is moving to curtail these rules as a way to entice more sheriffs and local officials to make their correctional facilities available.”

The Fox and Friends co-hosts couldn’t have been more thrilled by the prospect of making immigrants suffer more. Brian Kilmeade took the lead in advocating for more cruel conditions:

“The party is over for illegal criminals in jail. Get this: They’re enjoying seven hours of outdoor activity. Who gets that anymore? Fresh sheets, and absolutely — I don’t get that. No need to learn English. I was born with that. But the Trump administration vowing a new plan to cut back on perks in their immigration crackdown, saying, expect a far less detailed set of regulations — maybe even dirty sheets — including no translation services, so learn English.”

Let’s break down what is so upsetting to the Fox News crew. First of all, they think it’s outrageous that detainees are allowed to go outdoors. Still in prison, just not confined to a cell. Who ever heard of such luxury for prisoners? They also think that clean sheets are too extravagant for these “criminals.”

Perhaps the most disturbing of Trump’s reforms is the elimination of translators. Kilmeade says that he was born with English. That, of course, isn’t true. He was born without any language whatsoever. The fact that his birth took place in the United States to English speakers was an accident of fate. And in his arrogance he can’t comprehend the plight of people in legal detention. Not being able to defend themselves or consult with counsel is against every moral principle of justice.

In a later segment, Kilmeade’s co-host, Ainsley Earhardt, concurred with Kilmeade on every point:

“Seven hours of outdoor activity, freshly washed sheets, and absolutely no need to learn English. That’s the easy life of an illegal immigrant inside American jails. But now, the Trump administration says the party is over.”

Only an elitist who has lived a life of privilege could suggest that life in detention is “easy.” And the notion that it’s a party is both delusional and heartless. This is especially true when considering that these detainees are not the criminals that Fox News keeps describing. Most of them are parents and children fleeing poverty and violence. They are doing what any frightened and responsible family would do under those circumstances.

The truth is that many of the immigrant detention facilities are poorly maintained and managed. Detainees are routinely subject to illness and abuse. ThinkProgress has documented some of the despicable conditions that have led to prolonged hunger strikes. This is the reality that Fox News is trying to subvert in an effort to demonize vulnerable immigrants. And don’t forget that it is Trump’s policies that are the root cause of the suffering.