Last month Donald Trump watched impotently as the healthcare bill he championed went down in flames. The House of Representatives, certain of failure, didn’t even bring it up for a vote. Perhaps the fact that only seventeen percent of the American people were in favor of the GOP’s efforts to ditch ObamaCare had something to do with it. 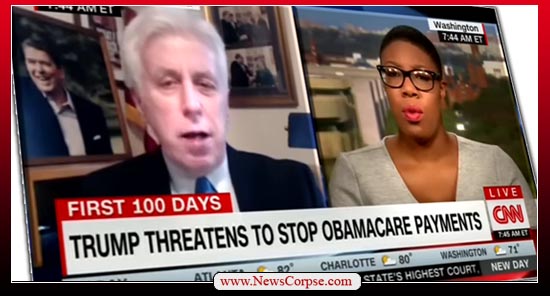 Now Trump is pretending that he didn’t fail at all. Contrary to reality, he contends that his plan is still being negotiated. As part of the alleged negotiations Trump threatened to withhold subsidy payments from millions of low income Americans. That would effectively cancel their insurance. So he is using these citizens as hostages to force Democrats into capitulating and voting against ObamaCare.

That was the subject of a debate on CNN Thursday morning (video below). Host Alisyn Camerota opened the discussion with a quote from Trump explicitly spelling out his attempt at blackmail:

“President Trump is considering making a drastic move to try to get Obamacare repealed. He is threatening to withhold billions of dollars in subsidies that the poorest Americans rely on. President Trump telling The Wall Street Journal, ‘Obamacare is dead next month if it doesn’t get that money. I don’t want people to get hurt. What I think should happen and will happen is the Democrats will start calling me and negotiating.'”

The tone of Trump’s message is reminiscent of a Mafioso ultimatum. “That’s a nice healthy family you got there. I don’t want people to get hurt. So you better do as I say.” Sen. Chuck Schumer shouldn’t be surprised if he wakes up next to severed horse’s head. Democratic commentator Symone Sanders observed the callousness in Trump’s threat and responded:

Trump’s inclination to use sick people as human shields is an amoral negotiating tactic. It would hurt innocent people who have no direct voice in the negotiations. Nevertheless, the tactic was defended by CNN’s Jeffrey Lord. And he chose perhaps the most offensive line of defense imaginable:

“Think of President Trump as the Martin Luther King of health care. When I was a kid, President Kennedy did not want to introduce the civil rights bill because he said it wasn’t popular. He didn’t have the votes for it, etc. Dr. King kept putting people in the streets in harm’s way to put the pressure on so that the bill would be introduced. That’s what finally worked.”

First of all, no sane person could compare Trump’s efforts to deny health for millions with King’s movement to bring about equality for all. Secondly, Trump isn’t asking people to voluntarily take to the streets in protest. He’s holding a knife to their throats while demanding obedience from Democrats. A fair analogy would be if King threatened to harm African-Americans if Congress didn’t accede to his demands. Try to imagine King putting a gun to the head of a citizen and saying “Pass the Civil Rights bill or the black guy gets it.” That’s the equivalent of what Trump is doing to health insurance recipients. Lord’s argument was preposterous on its face, and Sanders wasn’t having it:

“Jeffrey, you do understand that Dr. King was marching for civil rights because people that looked like me were being beaten? Dogs were being sicced on them. Basic human rights were being withheld from these people merely because the color of their skin. So let’s not equate Dr. Martin Luther King Jr., a humanitarian and Nobel Peace Prize winner, to the vagina-grabbing President Donald Trump.”

That pretty much says it all. By attempting to compare Trump with Dr. King, Lord only succeeded in making the differences between them more apparent. But he isn’t doing any worse than the rest of the Republican haters. None of them have any coherent arguments to support their heartless agenda, so they resort to these absurd mischaracterizations. And that makes it all the more puzzling that CNN would give someone like Lord a platform to disseminate his lies.