Anyone looking for idiotic ideas from the Donald Trump administration wouldn’t have to dig very deep before hitting the mother lode. Some of the more obvious examples include a health care plan so reviled they didn’t even bring it up for a vote. Cutting taxes for the rich. Building a wall on the southern border. Banning all Muslims from entering the country. And denying the catastrophic effects of climate change. But wait, there’s more. 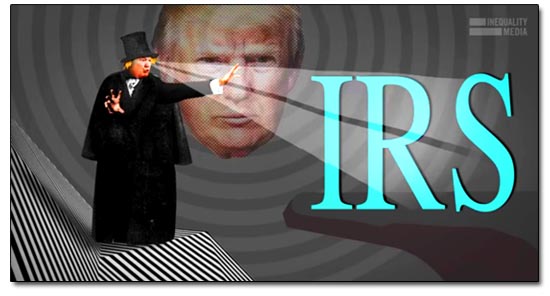 Robert Reich addressed a new Republican folly in a short but poignant video (posted below). He details how the GOP, in a committed effort to advance the cause of stupidity, put forward a proposal to cut the budget of the IRS by 14 percent. Apparently, having nothing else to do, they’ve had plenty of time to come up with ever more asinine initiatives.

In this case they found one that is a win-win for Republicans who hate government in general and the IRS in particular. This proposal would make it harder for the IRS to carry out its responsibilities. Thus, it would open up the agency to criticism for inefficiency that was created by this very cut. It would also create inefficiencies in every other branch of government that is starved for revenue by the reduced tax receipts. Which in turn would make those branches subject to criticism as well. By leaving untold billions of legitimately owed taxes uncollected, the federal deficit would skyrocket. Then, of course, the GOP’s pseudo-deficit hawks would whine about that and use it as a phony justification to cut more programs for the poor and middle-class.

What’s more, efforts by a crippled IRS to audit greedy corporations and millionaires would be severely curtailed. Consequently, they would have free rein to continue robbing the American people. Billions of dollars necessary to run critical federal programs like Social Security, the military, public safety (food, water, consumer products, etc.), transportation and infrastructure, medical research, criminal prosecution and prevention, and so much more, would be lost to fraud. These proposed cuts would come on top of previous cuts that have already hamstrung the IRS. According to the Center on Budget and Policy Priorities (CBPP) in a detailed and enlightening analysis…

“[P]olicymakers should not ignore the damaging effects of the significant cuts that have occurred in IRS funding, which remains well below its 2010 level even before adjusting for inflation. The cuts have led the IRS to reduce its workforce, severely scale back employee training, and delay much-needed upgrades to information technology systems. These steps, in turn, have weakened the IRS’s ability to enforce the nation’s tax laws and serve taxpayers efficiently” […]

“[F]rom a fiscal perspective, starving the IRS makes no sense, as the return on the investment is high. Each additional $1 spent on IRS enforcement yields $6 of additional revenue from collecting taxes owed.”

Nowhere else in the federal government can spending generate that kind of return on investment. It’s just plain nuts to eliminate such a productive method of raising funds. Especially when it doesn’t rely on new taxes or gutting useful programs. These cuts would have the triple purpose of weakening vital services upon which every American relies, granting amnesty to tax cheats everywhere, and artificially creating excuses to lash out at Big Government.

In the end, it is law abiding Americans who will have to shoulder the burden for these deadbeats. And let’s not forget that Trump himself is among those who would benefit from a broken IRS. Although we may never know how much since he refuses to releases his taxes. So the question is: Are the GOP really that stupid, or are they shrewdly executing their mission to starve the government, crush the middle-class, and enrich their benefactors?