Today is Earth Day and there are tens of thousands of people around the world attending the March for Science. Meanwhile, on Fox News, host Sandra Smith is interrogating a mild-mannered farmer from Nebraska about why he and ninety others are opposing the Keystone XL pipeline. (Video below) 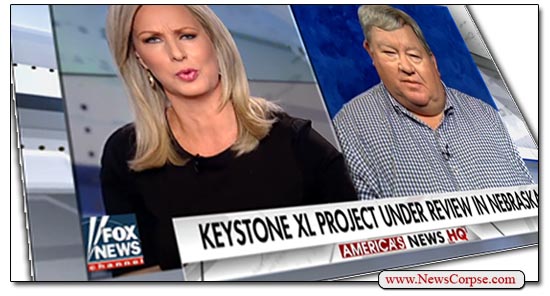 Art Tanderup represents a group of family farmers whose land and businesses would be put at risk by the pipeline. His appearance on Fox News was rather risky as well considering the network’s blatant support for the fossil fuel industry. Smith began the segment with a question that focused on an overtly partisan premise:

“President Trump has argued that the pipeline construction would bring new jobs. But the whole thing is now in the hands of a state regulatory board […] What is you goal here?”

Trump’s support for Keystone rests on a foundation of disinformation. Independent analysts agree that the the project would create about thirty-five permanent jobs. But even if it created more, that wouldn’t justify destroying communities and the livelihoods of private citizens.

Nevertheless, Tanderup responded to the question without addressing the political overtones. He said that the goal is to “leave the tar sands in the ground and move more rapidly to renewable fuels.” Elaborating on that he continued:

“After we learned how destructive the chemicals and the tar sands are, we have come to realize that this type of fossil fuel should not be happening. It doesn’t matter where it’s at. We need to look for other sources of renewable energy.”

But Fox’s Smith was undeterred. She continued using the President as wedge for her questioning. Or perhaps to remind her viewers that this farmer is contradicting their commander-in-chief.

“Those that support the Keystone XL pipeline, like the President, say that this is the best economic and the best solution for the native plants and animals of these areas. Considering that it’s a lot less dangerous than transporting this fuel by rail. What do you say to that?”

Tanderup was prepared for that angle and unbothered by the presidential name dropping. He noted that often underground pipeline leaks are not discovered for years. Consequently, they produce more damage over time than more visible rail accidents. So Smith changed directions and asked a leading question about energy independence. That led to this exchange:

Smith: We all want to achieve energy independence in this country. This was an effort and a step in that direction. How do you achieve that?”
Tanderup: Well first of all, this is not American oil, and it is going across America…
Smith: “But it’s coming from Canada, rather than the Middle East, would be the argument.”
Tanderup: “That’s true, but it’s going across America to be refined and exported, which is not for America’s use.”

Notice that Smith was fact-checked live about her contention that energy independence had anything to do with this. It doesn’t. But even then she attempted to imply that Canadian oil was the same as American. It’s not. And Tanderup’s obvious knowledge of the subject left her floundering.

This brief segment is a profound summary of the whole Keystone XL debate. The pipeline does not create the jobs that supporters claim. The oil is not American, so it doesn’t contribute to energy independence. And the refined oil is intended for export to Europe and Asia. So it isn’t helping to reduce American fuel imports. And if this Nebraskan farmer can get it right, so can Fox News. Which is the best evidence that Fox is deliberately getting it wrong to advance their right-wing political agenda.

Not that we need further evidence of Donald Trump’s mental unfitness to serve as president, but his latest Twitter tantrum gives us more anyway. 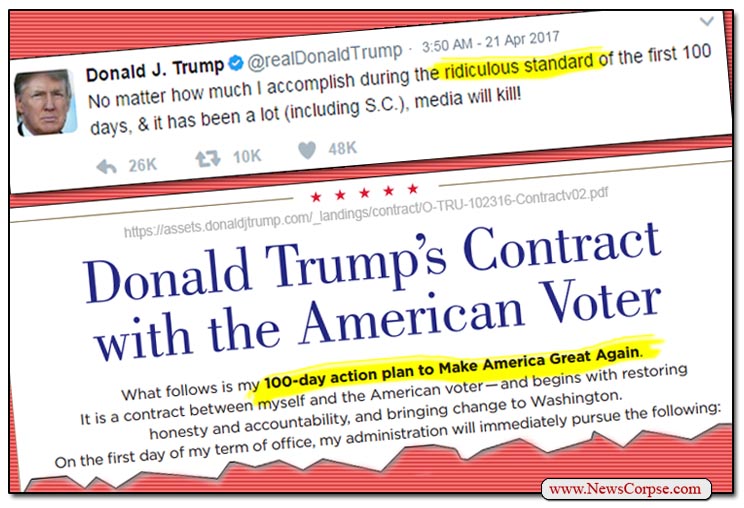 So Trump is now dismissing the standard that he previously embraced and used to advance his agenda. And just to be certain, here he is saying it on video:

.@transition2017 update and policy plans for the first 100 days. pic.twitter.com/HTgPXfPWeJ

In addition to the obvious hypocrisy on display, Trump’s “Contract with the American Voter (pdf)“ is a document of his utter failure. It consists of mainly things that he hasn’t achieved. What’s more, most voters don’t want him to achieve any of these things to begin with.

No wonder the most conspicuous achievement of his short tenure is having the lowest approval rating of any president ever.