In another embarrassingly weak performance, Fox News has suffered a ratings fall-off in February 2018 that signals more trouble ahead. Fox’s declining fortunes are becoming a regular event. In January the network dropped fourteen percent in primetime. Now February has topped that with an additional fifteen percent decline. Meanwhile, MSNBC gained significantly in both months of this new year.

In January Rachel Maddow outperformed Hannity, and all other cable news programs, in the key audience demographic of 25-54 year olds. She came just short of repeating that performance in February with an average of 635,000 viewers per night. Hannity edged her out with 643,000. However, of the twenty days in February, Maddow won a majority (eleven) of them.

Maddow’s practice of covering breaking news and the unfolding scandals of the scandal-ridden Trump administration has proven to be an unqualified success. Her deep dive into research and expert analysis continues to draw devoted viewers. Two years ago no one would have predicted that Fox would be a second place news network. Fox actually moved Hannity into a direct time period competition with Maddow in an attempt to blow her out with his top rated program. That didn’t go exactly according to plan and must be gnawing at Hannity and his Fox bosses.

Consequently, Hannity’s program is sinking into ever more ludicrous conspiracy theory territory. He is challenging Alex Jones as the right-wing’s most unhinged crackpot. On almost every show Hannity ignores actual news of Trump’s daily failures. Instead, he features topics exploring Hillary Clinton’s ancient and baseless controversies, or some version of the alleged “deep state” takeover of America. And of course, Hannity is serving his master in the White House with constant attempts to slander special counsel Robert Mueller and the FBI.

These subjects are also spread across the Fox News schedule. It’s why Fox viewers are so often shown to be more uninformed (or ill informed) than viewers of any other news network. And it is probably contributing to the overall audience decline at Fox as people seek out actual news and information relevant to their lives. But it is consistent with the Fox News commitment to defend Trump at all costs.

The Fox News mission has always been to prop up the conservative, Republican agenda. But it’s more immediate objective is to discredit the investigations into Trump’s unsavory connections to Russia (and other financial corruption). And flagrant propagandists like Hannity, Tucker Carlson (who just called Democrats anti-American), and the “Curvy Couch” potatoes of Fox and Friends, are focused intently on smearing America’s law enforcement and intelligence institutions. They are putting their rancid partisanship before the interests of the country. And America’s television viewers are reacting with disgust and seeking out more credible reporting. Which is good news for Maddow and MSNBC.

There are plenty of repugnant cretins on Fox News who devote themselves to distorting reality and misinforming their dimwitted audience. No one is more of a sycophantic disciple of Donald Trump than Sean Hannity. And Steve Doocy’s portrayal of an imbecile infatuated with the President is spot on. But Tucker Carlson has carved out his own domain as the master of indignant arrogance stewed in hypocrisy and logical dysfunction. 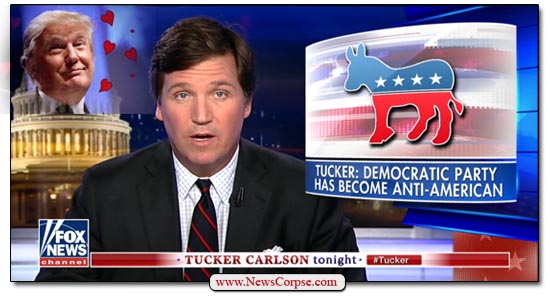 On Thursday’s program Carlson set out to express a rare disappointment with his hero in the White House. It stemmed from Trump’s boneheaded assertion that guns should be confiscated from certain individuals without due process of law. That’s a position that was quickly denounced by all sides of the gun reform debate, including most fiercely by the NRA. But Carlson’s lecture (video below) was especially convoluted and managed to make Democrats the villains for what Trump said. What follows is an annotated transcript of the highlights.

“The alternatives to what we have now are scary and getting scarier. The Democratic Party is completely irresponsible and increasingly anti-American. They prefer illegal aliens to our middle-class. That’s true and it’s terrifying. Someone needs to defend the country from these people. Trump mostly does that.”

So Trump advocates violating the Constitution, but it’s Democrats who are anti-American? And Carlson’s deranged and insulting assertion that Democrats “prefer illegal aliens to our middle-class” is baseless and purposefully inflammatory. What’s true and terrifying is Carlson’s anti-American suggestion that the country needs to be defended from people he disagrees with.

“At one point the President said ‘The government should take the guns first, go through due process second.’ How honest do you want to be. Imagine if Barack Obama had said that. Just ignore due process and start confiscating guns. Obama would have been denounced as a dictator. We would have denounced him first. Trust me.”

Well, to be fair, Carlson and Fox News did denounce Obama as a dictator with predictable frequency, but never with justification. But his point was that Trump’s proposal for gun confiscation should receive the same criticism. Let’s see how that went.

“It’s important to remember that nobody should be tied to a person, but instead to principles. So with that in mind, do you think it’s worth just reminding the President – as we all need to be reminded sometimes – that there are deeper principles here?

How generous. Carlson won’t denounce Trump’s dictatorial raving, but politely remind him of the principles that he’s certain Trump has anyway. What happened to being the first to denounce dictatorship? That must not apply to your ideological crush with the long, flowing, golden locks (vainly covering his crusty bald spot). However, Carlson’s presumption of Trump’s true inner feelings were proven correct overnight as Trump tweeted that he’d made up with the NRA in an Oval Office tryst:

Good (Great) meeting in the Oval Office tonight with the NRA!

Here’s the video of Carlson’s Democrat-bashing, love letter to dictator Trump, if you can stomach it.