When the President’s schedule was released for this weekend there was nothing on it. He wasn’t going to Mar-A-Lago, or a campaign rally in coal country, or to visit a bunch of wall prototypes in the California desert. He wasn’t occupied with Little Rocket Man or Russia’s assassinations in the U.K. And having just fired his Secretary of State, he is probably gonna avoid further dismantling his cabinet for a few days so he doesn’t appear to be unstable (too late). But this abundance of leisure time for Donald Trump is never a good sign. Idle tiny hands are the Devil’s plaything. 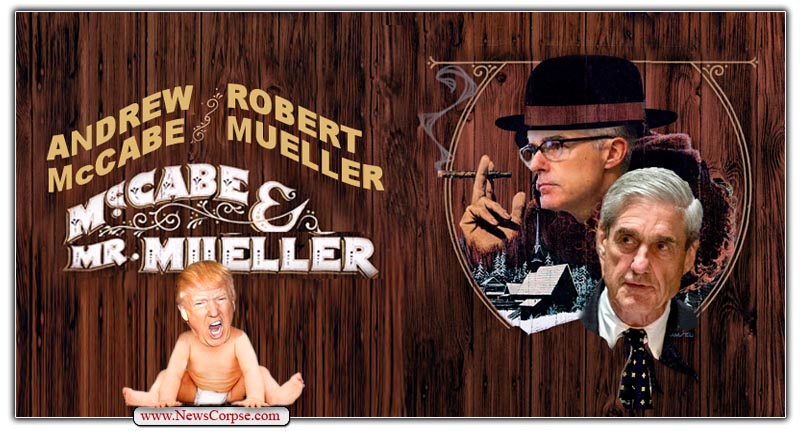 As expected, Trump filled the empty morning hours on Saturday with adventures on Twitter. Even after a year it is surprising and disturbing that the leader of the free world can occupy himself so frequently with mini-tantrums on social media. But there he was in the White House residence tweeting away. And the subject that was dominating his infantile thoughts was, as usual, himself.

Trump was clearly obsessed with the reaction to the firing of Deputy FBI Director Andrew McCabe. Never mind that he likely directed Attorney General Jeff Sessions to execute the petty and vindictive termination. The timing was obviously intended to deprive a twenty-year veteran of law enforcement of his rightfully earned pension. But the larger purpose was to discredit McCabe as a witness against Trump in the still unfolding legal melodrama. Unfortunately for Trump, though, his tweets only serve to exacerbate his guilt. For instance:

Andrew McCabe FIRED, a great day for the hard working men and women of the FBI – A great day for Democracy. Sanctimonious James Comey was his boss and made McCabe look like a choirboy. He knew all about the lies and corruption going on at the highest levels of the FBI!

In this missive Trump is proving that the firing of McCabe was tied directly to the investigation by special counsel Robert Mueller. A major target of that probe is obstruction of justice partly demonstrated by Trump firing FBI Director James Comey. And if Trump thinks he’s making points by referencing “the hard working men and women of the FBI,” then he’s apparently unaware that those worker greatly admire and support Comey and McCabe, and resent they way they’ve been treated. Which leads us to this:

As the House Intelligence Committee has concluded, there was no collusion between Russia and the Trump Campaign. As many are now finding out, however, there was tremendous leaking, lying and corruption at the highest levels of the FBI, Justice & State. #DrainTheSwamp

Once again Trump is connecting recent events to the Mueller inquiry. However, he falsely asserts that the House Intelligence Committee cleared him when it is only the bitterly partisan Republican members who signed onto the committee’s disinformation report. And Trump’s accusations against the FBI don’t do anything to help his legal cause. Nor does the last of his morning tweets:

The Fake News is beside themselves that McCabe was caught, called out and fired. How many hundreds of thousands of dollars was given to wife’s campaign by Crooked H friend, Terry M, who was also under investigation? How many lies? How many leaks? Comey knew it all, and much more!

Trump’s moaning about “fake news” is just becoming tedious and a satire of itself. All he’s doing is reminding everyone that the press is reporting what is actually happening and that Trump hates it when they do that. And in this tweet he unwisely asks the questions “How many lies? How many leaks?” Which most people are already asking, but about Trump. But the best part is where Trump notes that “Comey knew it all, and much more!” Indeed he does. And he’s anxious to share what he knows with the American people.

Mr. President, the American people will hear my story very soon. And they can judge for themselves who is honorable and who is not.

Trump, on the other hand, is desperate to keep Americans from learning about what he has done, and is doing. That’s why his attorney is calling for an abrupt end to the Mueller investigation. It’s why his other attorney is trying to gag Stormy Daniels. At every turn Trump is focused on keeping his affairs (both sexual and political) secret. That’s what legal professionals call “consciousness of guilt.” And it’s what Trump displays with each new tweet he posts. It’s almost as if he has a legal death wish. He must hate the White House so much that he’s doing everything he can to get out of it. If only he knew how much we would all like to help him do that.

The Mueller probe should never have been started in that there was no collusion and there was no crime. It was based on fraudulent activities and a Fake Dossier paid for by Crooked Hillary and the DNC, and improperly used in FISA COURT for surveillance of my campaign. WITCH HUNT!

No matter how many times he says there was no collusion, it doesn’t make it true. There is abundant evidence of collusion and he knows it. That’s why he keeps telling the same already debunked lies. Like that the Steele dossier (of which much was verified) was the basis for the special counsel investigation (it wasn’t). Or that the FISA court was mislead (they weren’t). And if this is a witch hunt, they have already nailed nineteen witches (indictments) with five pleading guilty. And they’ve only just begun.