File this one under “HOLY SH*T” – if there’s still any room in that file. At a Republican fundraiser at his Mar-A-Lago resort, Donald Trump gave a speech that firmly establishes his not-so-thinly-veiled aspirations to be become America’s dictator. This was an event where the press was locked out, but a recording of Trump’s remarks manged to make its way to CNN. Here’s part of what he said per CNN (video below):

No, we f**king won’t! And if that weren’t horrendous enough, the audience of GOP fat cats cheered wildly. They actually think it would be a good idea. At the very least they weren’t offended by the wholly inappropriate humor (if that’s what the White House tries to excuse it as tomorrow).

Trump also ran through his “greatest hits,” with complaints that Hillary Clinton hasn’t been locked up for whatever imaginary crimes Trump thinks she committed. He whined about the “rigged system” that sent him to the White House. And he lashed out again at his Attorney General, Jeff Sessions for not obeying his tyrannical whims and prosecuting whoever he regards as an enemy. He may want to be careful about that because it might just come back to chew off a chunk of his fat ass.

For someone who has been repeatedly castigated for behavior that emulates tyrants like Xi, Vladimir Putin, Rodrigo Duterte, and even Hitler, it is astonishing and disgusting that he would say anything like this, even in jest. But it nevertheless fits his reprehensible character (or lack thereof) and affirms that he has no sense of decency. However, the reaction from his comrades in the ballroom may be even worse. Their positive response is the sort of thing that results in narcissistic bullies transforming into full fledged dictators. They are the forward flank of the Trump cult, and are enabling his deranged, power hungry, madness.

Let’s be clear from the outset, Attorney General Jeff Sessions is a repugnant, racist individual who should never have a role in public service. He rose from the Klan-infested South where he fit right in with the bigots of Alabama. He was rejected by the Senate for a federal judgeship due to reports of his prejudice and use of the “N” word. He was the first senator to endorse Donald Trump for president. During the campaign he he met twice with Russians and lied about it to congress. It’s a resume that ought to disqualify him from any position of respect or power. 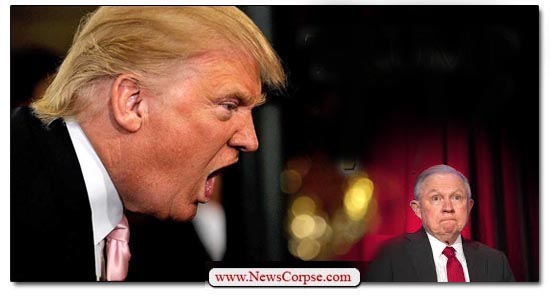 That said, Sessions is in a unique position. In one of his first appointments, Trump made him the Attorney General of the United States. But ever since then the President has lambasted him in an embarrassingly public way. The insults have flown from Twitter, as well as deliberate leaks from within the White House’s inner circle. Most recently Trump has been referring to Sessions as the blind and bumbling cartoon character, Mr. Magoo. But that’s just the latest humiliation that Sessions has had to suffer. Some of Trump’s attacks on Twitter include:

Why is A.G. Jeff Sessions asking the Inspector General to investigate potentially massive FISA abuse. Will take forever, has no prosecutorial power and already late with reports on Comey etc. Isn’t the I.G. an Obama guy? Why not use Justice Department lawyers? DISGRACEFUL!

….This is real collusion and dishonesty. Major violation of Campaign Finance Laws and Money Laundering – where is our Justice Department?

So why aren't the Committees and investigators, and of course our beleaguered A.G., looking into Crooked Hillarys crimes & Russia relations?

In addition to these, Trump’s state-run TV division (aka Fox News) has predictably adopted his animosity toward Sessions and piled on with fierce denunciations. Anchors like Sean Hannity and Lou Dobbs have called for the Attorney General to resign or be fired. They regard his recusal from the special counsel’s investigation as treason. Consequently, Fox News and right-wing Republicans are demanding that Sessions appoint a second special counsel to look into bogus claims of FISA abuses and FBI violations of law.

There has to be a point at which a normal human being will cease to take such constant and demeaning abuse. The question is whether Sessions has reached that point already.

It’s notable that, despite Trump’s persecution, Sessions has failed to bend to his will, at least with regard to Robert Mueller. In fact, Sessions has taken several opportunities to support Mueller and the Deputy Attorney General, Rod Rosenstein. The pressure from the White House and the pro-Trump media has been intense, but Sessions has not been moved. To the contrary, it was just announced that the FBI has begun an investigation into Ivanka Trump’s business deals.

The legal action against the President’s daughter cannot be dismissed as routine. Particularly from an administration that has been so criminally partisan. Along with Sessions’ firm support for the special counsel and refusal to resign under pressure, there is reason to believe that he may have some form revenge in mind. He has been in politics a long time and may be tougher than he looks.

If Sessions retains any semblance of humanity he may be building up some resentment and smoldering rage. He might want to show Trump that he won’t tolerate such abuse. And if that’s true it would be disastrous for Trump. Sessions has the whole weight of the Justice Department to throw around. That includes the FBI and some oversight (handled discreetly) of the special counsel. He could even switch sides and start spilling what he knows about Trump to Mueller’s team. And with all of the potential legal vulnerabilities hovering over Trump’s head there’s plenty of fuel to burn the Trump Crime Family to a crisp. In other words, Trump better watch his step or he’ll piss off the one person in his administration that can do him the most harm.

To be sure, there is a lot speculation in this theory. Sessions’ reprehensible past and demonstrated loyalty might make him reluctant to move against his boss. But his ego and aspirations for a halfway decent legacy might take precedence. Especially if he sees Trump’s downfall as inevitable and doesn’t want to go down with the ship.

UPDATE: The Washington Post is reporting that there is “Pure Madness” and “Dark days inside the White House.” And this excerpt is particularly relevant:

“Aides tell WaPo ‘Trump seethed with anger’ over the photo of Sessions at dinner with Rosenstein and the Solicitor General. The next morning, Trump was still raging about the photo, venting to friends and allies it was an intentional show of disloyalty.”