On Thursday afternoon, Donald Trump held another of his Apprentice-style boardroom cabinet meetings. These are made-for-TV stunts that emulate his old TV game show with him in the center of a bunch of sycophants obediently awaiting his magic glance and, if they’re lucky, a rare compliment. There is also a faint hint of danger that Trump’s brain might glitch and he’ll accidentally fire somebody. 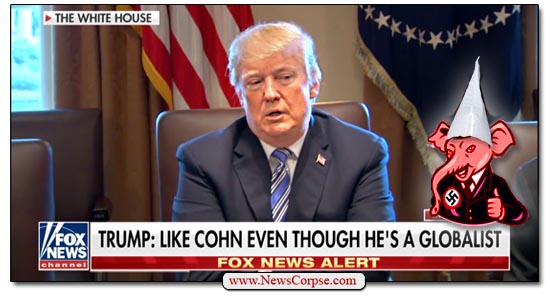 On this occasion Trump actually did discuss the termination of one his administration’s top aides, Gary Cohn. the chief economic advisor, announced earlier this week that he was leaving his White House post following a disagreement with Trump on imposing tariffs on steel and aluminum. Trump noted that this cabinet meeting would be Cohn’s last. And then he jovially unleashed this noxious comment (video below):

“This is Gary Cohn’s last cabinet meeting. He’s been terrific. He may be a globalist, but I still like him. He’s seriously a globalist, there is no question. But he’s also a nationalist because he loves our country.”

Holy Schomley. Donald Trump may be trying to set a record for bigoted insults in a single sentence. Without any hist of shame, Trump rattled off two rancid, ethnically-charged invectives aimed at his departing Jewish staffer. The conspicuous prejudice in his remarks cannot be overstated. Nor should the egregious laughter from his cabinet be dismissed. For the record:

Glabalism is a longtime anti-Semitic trope based on the the idea that Jews are not loyal citizens. Their allegience is only to worldwide financial markets and cooperatives. It has been adopted as the rhetoric of alt-right groups who oppose immigration and diversity, and advocate maintaining an anglo-European majority in the United States. It’s been used disparagingly against everyone from George Soros to Chuck Schumer, and now Gary Cohn. And of course, to rightists like Trump the media and banks are crawling with them.

White nationalism is a modern re-labeling of white supremacists. Advocates include the usual racist organizations such as the Ku Klux Klan, Aryan Nations, and the American Nazi Party. They openly support racial discrimination and oppose immigration from non-European countries. The adherents of this brand of nationalism include David Duke, Richard Spencer, and Trump aide Steven Miller. And most of the nation’s organized white nationalist groups endorsed Trump for president.

For Trump to use both of these heinous terms in such close proximity, and directed at a Jewish member of his staff, is nothing but reprehensible. It affirms his commitment to the hateful ideology of cretins like Steve Bannon that got him elected. And sadly, the media will likely gloss over these epithets. Which is too bad, because it’s just another example of Trump getting away with advancing a hateful agenda.