Lt. Col. Ralph Peters (Ret) is a familiar face on Fox News. He has been doing commentary on military matters and foreign affairs for more than a decade. He has always been a hard-core spokesman for ultra-conservative views and a fierce opponent of all things liberal. He once called President Obama a “total pussy” on the air (for which he got a two week suspension). 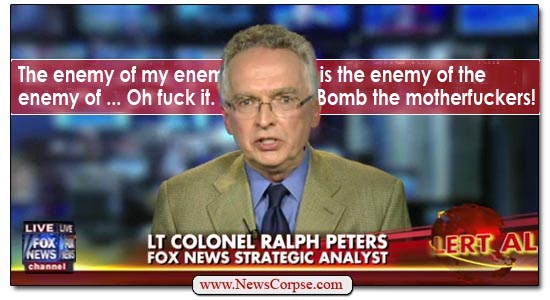 For a little background, Peters is so radical that he once complained that the U.S. military needed to buck up and produce more civilian casualties in order to win the war on terror. He also advocated targeting the media for military attacks, including in the U.S. But more recently he has assumed a strident “NeverTrump” position. He believes that Donald Trump is Putin’s puppet and even announced on Fox that he would be voting for Hillary Clinton because he doesn’t “want Moscow’s man in the White House,” and that “Vladimir Putin has a deep hold on Trump.”

Bearing all of that in mind, the letter Peters released on Tuesday is all the more remarkable. In it he announced that he was severing his relationship with Fox News. And the substance and tone of the document is just plain shocking. For someone so devoted to the far-right agenda, Peters’ descriptions of Fox News must sting. And no matter how much of a war-mongering neanderthal he is, he seems to have solid grasp of how reprehensible and dangerous Fox News is. So read on in amazement (emphasis added):

On March 1st, I informed Fox that I would not renew my contract. The purpose of this message to all of you is twofold:

First, I must thank each of you for the cooperation and support you’ve shown me over the years. Those working off-camera, the bookers and producers, don’t often get the recognition you deserve, but I want you to know that I have always appreciated the challenges you face and the skill with which you master them.

Second, I feel compelled to explain why I have to leave. Four decades ago, I took an oath as a newly commissioned officer. I swore to “support and defend the Constitution,” and that oath did not expire when I took off my uniform. Today, I feel that Fox News is assaulting our constitutional order and the rule of law, while fostering corrosive and unjustified paranoia among viewers. Over my decade with Fox, I long was proud of the association. Now I am ashamed.

In my view, Fox has degenerated from providing a legitimate and much-needed outlet for conservative voices to a mere propaganda machine for a destructive and ethically ruinous administration. When prime-time hosts–who have never served our country in any capacity–dismiss facts and empirical reality to launch profoundly dishonest assaults on the FBI, the Justice Department, the courts, the intelligence community (in which I served) and, not least, a model public servant and genuine war hero such as Robert Mueller–all the while scaremongering with lurid warnings of “deep-state” machinations– I cannot be part of the same organization, even at a remove. To me, Fox News is now wittingly harming our system of government for profit.

As a Russia analyst for many years, it also has appalled me that hosts who made their reputations as super-patriots and who, justifiably, savaged President Obama for his duplicitous folly with Putin, now advance Putin’s agenda by making light of Russian penetration of our elections and the Trump campaign. Despite increasingly pathetic denials, it turns out that the “nothing-burger” has been covered with Russian dressing all along. And by the way: As an intelligence professional, I can tell you that the Steele dossier rings true–that’s how the Russians do things.. The result is that we have an American president who is terrified of his counterpart in Moscow.

I do not apply the above criticisms in full to Fox Business, where numerous hosts retain a respect for facts and maintain a measure of integrity (nor is every host at Fox News a propaganda mouthpiece–some have shown courage). I have enjoyed and valued my relationship with Fox Business, and I will miss a number of hosts and staff members. You’re the grown-ups.

Also, I deeply respect the hard-news reporters at Fox, who continue to do their best as talented professionals in a poisoned environment. These are some of the best men and women in the business.

So, to all of you: Thanks, and, as our president’s favorite world leader would say, “Das vidanya.”

That hardly requires any elaboration. However, Fox News issued a brief and uncharacteristically weak response:

“Ralph Peters is entitled to his opinion despite the fact that he’s choosing to use it as a weapon in order to gain attention. We are extremely proud of our top-rated primetime hosts and all of our opinion programing,”

Fox didn’t even bother to refute any of Peters’ allegations regarding Fox’s devolution into a propaganda machine. Nor did they defend the assertions that Trump is a hapless asset of Vladimir Putin. They just bragged about their on-air shills (only those in primetime) and made a wholly nonsensical accusation that Peters was seeking attention. By quitting his job at a major cable TV network? Um, Okay. Let’s see if any of his former colleagues have the guts to join a long overdue and righteous exodus from Fox. Or they can stay and forever wallow in the treasonous glow of Comrade Trump’s State TV.

In the meantime, The Daily Show compiled some of Peters’ greatest hits. This is the guy who has now come around (finally) to the view that Fox News is “fostering corrosive and unjustified paranoia among viewers.” 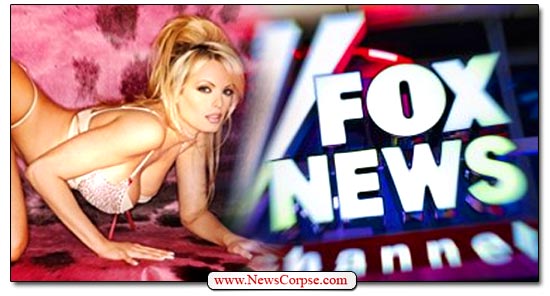 This neglect did not go unnoticed by Daniels’ attorney Michael Avenatti. He told Ari Melber on MSNBC that “I haven’t received a single interview request, not one, from Fox News.” That’s after Avenatti appeared repeatedly on many other news programs and frequently broke new information. So his absence on Fox was undoubtedly deliberate.

As a result of Avenatti’s complaints, it can now be reported that Fox News was apparently shamed into reaching out to him with a request for an interview. Avenatti accepted the offer and will appear Tuesday night. But before anyone gets the idea that Fox is being fair and balanced, note that the offer is for a segment on “Fox News @ Night with Shannon Bream,” a program that airs from 11:00 PM to midnight. So Fox is burying the interview on a late night show that frequently comes in third after MSNBC’s Brian Williams and CNN’s Don Lemon.

For a topic this important, it is journalistic malpractice to tuck it away in the wee hours. It would ordinarily be the sort of program that would bring Fox’s lips to watering. It has the tabloid salaciousness of sordid sex with an X-rated beauty queen, the intrigue of a political cover up, and the lawlessness of election tampering. If President Obama had paid off an erotica celeb to hide his tawdry promiscuity, Fox News would have turned it into twelve part mini series.

One has to wonder where the allegedly “news” focused programs on Fox are during all of this. Bret Baier and Shepard Smith have apparently declined to seek an interview with Avenatti. And even the primetime shills Tucker Carlson, Laura Ingraham, and Sean Hannity, who you would think would love to grill this “floozy’s” rep, are laying low. Could that really be the result of independent booking decisions on the part of all of these Fox anchors? Not likely. More plausible is that an edict has been declared from on high in Fox’s executive suites that Stormy and her advocates are verboten during any time period when people are actually watching?

This is certainly additional evidence that Fox News isn’t really a news network. They are not making editorial decisions based on news worthiness or even ratings. They are deep-sixing a huge story that has shown persistence in the news cycle for weeks. They are obviously trying to mute the criticism that they have avoided this story by airing the interview but burying near midnight with an anchor most people have never heard of. And all of this is being done to shield Donald Trump from the embarrassment that is his actual life. But unfortunately for Fox News – and thanks to the sex angle – this story is getting out no matter how badly Fox wants to crush it. Only their own regular viewers will be left ignorant, as usual.