Last June Fox News retired their classic slogan “fair and balanced.’ It has taken nearly a year for them to come up with a new one. But earlier this month they revealed it to be “Real News, Real Honest Opinion.” Their promo promised that “It’s about to get REAL.” Which kind of implies that it’s been bullshit up until mow. 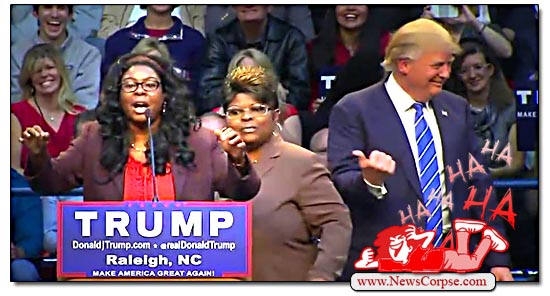 An example of what Fox regards as “Real News’ was on display Sunday morning on Fox and Friends. The “Curvy Couch” potatoes aired a segment about the firing of FBI Deputy Director Andrew McCabe. That’s a serious issue and demands serious attention and thoughtful analysis. So naturally Fox and Friends turned to YouTube vloggers Diamond and Silk.

For those of you who are unaware of this dynamic duo, they are African-American sisters who were confirmed nobodies until they pledged their unquestioning allegiance to Donald Trump. At that point they were snatched up by Fox News and other right-wing media as representatives of the black Republican perspective. Since polls show that Trump is viewed favorably by only about three percent of African-American voters, D&S made a profitable choice to become among the few black supporters of Trump in the media. They join such intellectual icons as Herman Cain and Omarosa as Fox News regulars.

On Sunday’s episode of Fox and Friends, the subject of McCabe’s abrupt dismissal after more than twenty years of service to his country came up and the insight of D&S was sought out (video below). The pair, who seem to perform only as a twosome, began their predictably negative harangue in harmony by complaining that McCabe has been offered work by Democrats in congress so that he can preserve his pension:

Diamond: What we don’t understand is how is it that the Democrats wanna offer McCabe a job so he can have money in his pocket, but they wouldn’t even come to the table for law abiding Americans to make sure we had money in our pockets. What are the Democrats trying to hide? What do McCabe have over the Democrats’ head? What are they covering up? Are they colluding? Maybe we need to bring in a special prosecutor to watch the Democrats and McCabe. Because we know Mueller is gonna turn a blind eye. That’s what I think.
Silk: And it sounds like a kickback, patty whack, give a dog a bone kinda deal.

If that sounds like the Real Housewives of Trumplandia rattling off cliched talking points, that’s because it was. Most of it had nothing to do with the question at hand. They just wanted to rant about Democrats covering up – who knows what, and colluding with – who knows who. So they shoehorned it into their routine. For the record, it’s the Democrats who have been working to put money into the pockets of the American people through increases in the minimum wage and tax reform that favors the working and middle classes rather than the rich and corporations. But D&S aren’t especially concerned with facts.

The rest of the segment was spent attacking MSNBC’s Stephanie Ruhle for making a trivial comment that Fox Christianists blew up into an unholy abomination. Ruhle merely expressed some curiosity at Trump’s choice for chief economic advisor, Larry Kudlow, suggesting that the decision was “God’s will.” That led to a couple of minutes of of outright sermonizing. And of course, the conclusion by D&S was that Democrats “despise Christianity.”

So Fox News spent nearly four minutes interviewing these ignorant blowhards who have no qualifications whatsoever to provide political analyses. That puts them in the same boat as most of Fox’s hosts and contributors. Almost none of them came to their roles with any experience in journalism or political science. And yet Fox now wants to characterize itself as the network of “real news.” But with cartoon characters like Diamond and Silk weighing in on matters as important as the President’s collusion with Russia to tamper with our elections, and obstruction of justice, they must have a very twisted definition of reality. Stay tuned for their a riveting debate on gun reform between Sean Hannity and Ted Nugent. Followed by a probing discussion of North Korea’s nukes with Happy Days’ Chachi, Scott Baio.