Well, here’s something you don’t see everyday (unless you’re watching Fox News). Donald Trump’s former communications director, Anthony Scaramucci, was a guest on Friday’s episode of Fox and Friends. This is the guy who lost his White House job a mere ten days after he was hired because of a profanity-laden meltdown attacking fellow Trump staffers. He’s a hot-head in the mold of Trump who continues to serve as a loyal surrogate. 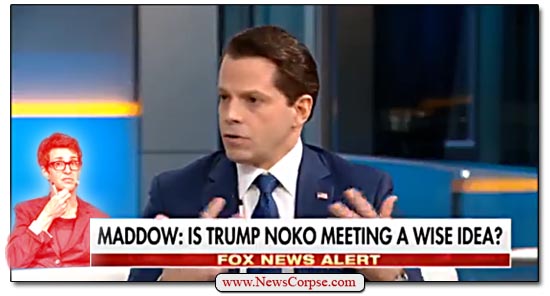 During his interview by the “Curvy Couch” potatoes (video below), the Mooch leveled another of his patented gross-outs, this time aimed at MSNBC’s Rachel Maddow (who is slaughtering Fox News and Sean Hannity). It was wholly inappropriate personal insult that was devoid of substance. In other words, it was pretty much the same bullshit non-reasoning that all of the cretins on Fox News resort to. About Maddow he said that…

To be clear, Scaramucci is criticizing Maddow as being “deranged” and having an anxiety problem. The same guy who told the New Yorker that Reince Priebus is a “fucking paranoid schizophrenic,” and that Steve Bannon engages in self-fellatio, and that he wants to “fucking kill all the leakers” in the White House. That’s the guy who thinks that Maddow and other liberals should “take it easy?” Yeah, whatever. [Note: Scaramucci later tweeted an apology].

The topic of the segment was Trump’s announcement that he accepted Kim Jong Un’s invitation to meet and discuss a resolution to their juvenile slap-fight on Twitter. The Fox News crew was aghast that Maddow would have anything critical to say about that. They played a clip from her show wherein she wondered…

“Why has no sitting American president ever met with a leader of North Korea? Why has that never happened in all the decades North Korea existed as a nation? Shouldn’t I take this to mean that this might be a particularly risky, or even an unwise move?”

Those are perfectly reasonable questions. What’s more, Trump’s impulsive agreement to meet with Kim demonstrates a dangerous incompetence with regard to what Trump considers his greatest asset: dealmaking. A meeting with the President of the United States is an asset that a smart negotiator would reserve until other concessions were made by the opposing party. Trump gave it up at the very beginning. He got nothing for it, or for the legitimacy it grants to Kim. He could have at least asked that the Americans currently being held in North Korea be released as a prerequisite to a meeting.

Fox News is predictably hailing Trump’s concession to meet Kim as a historic achievement. Never mind that the meeting hasn’t taken place and there are no guarantees that anything productive will result from them. In fact, there’s a fair chance that a summit between The Dotard and Little Rocket Man might make everything worse. They are two unstable, narcissistic individuals with little respect for one another. If their common stubbornness results in a fruitless affair, it might even make military conflict more likely as the prospects for diplomacy fade.

Time will tell if Trump can attend this meeting (if it even comes to pass) without screwing up. In his meetings with Congress he has proved that his word is virtually worthless and neither Democrats nor Republicans can rely on him to follow through. In the meantime, we fan expect philistines like Scaramucci to keep showing up on Fox News slinging insults and ignorance at their dimwitted audience. And maybe the world will survive a little bit longer.